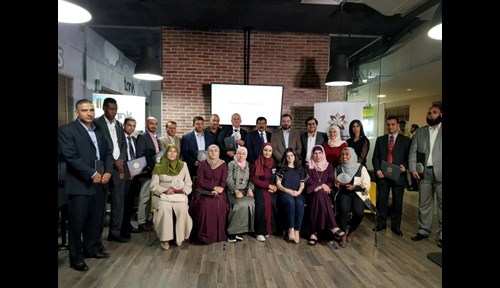 May xx, 2018 – Amman, Jordan: Umniah and the Andalusia Foundation have announced the names of the winning teachers of the National Digital Citizenship competition that aims to encourage the positive use of technology. The announcement was made during a ceremony held at Umniah's business innovation incubator The Tank and saw the attendance of H.E. Director of the Educational Activities Administration Dr. Abdelkarim Al-Yamani, who was representing the Minister of Education, as well as Umniah CEO Ziad Shatara, Andalusia Foundation CEO Baraa Al-Dibs and a group of teachers. The winners of the prestigious award are Asma' Hasan Abu Hindi from the Al-Juwayydeh Secondary Girls School, Ra'ed Sultan Al-Jarawneh from the Sahab Secondary Boys School, Nahida Mustafa Al-Qudah from the Princess Basma Girls School, Khaled Abd-Al-Ra'ouf Abdalla from the Bilal Bin Rabah School and Qasim Muhammad Ma'touq from the Marj Al-Hamam Secondary Boys School. The competition, the largest initiative of its kind to encourage teachers and students to use technology positively and responsibly, is aimed at strengthening the teacher's role as an effective partner in local communities and in building generations, continuously reinforcing positive values and principle among their students. Speaking on behalf of the Minister of Education, Dr. Al-Yamani praised the roles played by both Umniah and Andalusia Foundation in the success of this national initiative, which is in line with their mutual support of the educational process. Both institutions understand the way that the Internet has opened up the world, with these new opportunities increasing their awareness of the need to harness this tool in a safe and responsible manner. At the ceremony, Umniah CEO Ziad Shatara affirmed the company's absolute belief in the need to reinforce awareness, especially among members of the educational sector, of safety measures when accessing information on the Internet, benefitting from it securely and constructively. This rings especially true for teachers, who transfer their experiences directly to students. He noted that the competition aimed to show the importance of addressing information technology issues for all age groups, as well as allowing suitable access for each. Shatara also highlighted the strategy adopted by Umniah in spreading awareness about information security, and its role in social responsibility initiatives that target the youth. This, Shatara added, is due to the company’s belief in its capacity to effect change for the better. He affirmed that Umniah has devised a strategy that allows it to be a permanent and supportive partner of initiatives that affirm positive behavior, particularly among the youth. At the ceremony, Andalusia Foundation CEO Baraa Al-Dibs said that the competition has had a tangible effect on the community, reinforcing digital etiquette when using the Internet. It has also helped spread awareness on preserving the privacy of others, respecting differing views and ideas, intellectual and authorship property rights, renouncing violence and hate, criminalizing theft and violating privacy, and the risks of insecure use of the Internet and its legal ramifications. The competition empowered teachers in their roles when carrying out extracurricular activities that highlight these standards, helping them create a generation armed with knowledge, culture and social etiquette. There has also been a marked growth among the youth in their communities, helping build a generation that is more aware, motivated and committed to positive digital citizenship as a basis for constructive education. The national digital competition focuses on directing teachers to raise awareness among students on appropriate and responsible behavior when using technology and social communication methods, measures that reinforce digital etiquette among students and teachers alike. The announcement of winners of the National Digital Citizenship Competition coincided with the World Telecommunications and Information Society Day. The National Digital Citizenship Competition is part of the strategic partnership between Umniah and the Andalusia Foundation, which was kicked off in April at Umniah's business innovation incubator The Tank. Al-Dibs noted that the Andalusia Foundation is an independent, not-for-profit educational institution with objectives that are dedicated to increasing morals throughout the world. In order to achieve this, the institution concentrates on enriching the Internet’s positive moral content, motivating individuals and groups to further their high morals, provide a civilized humanitarian and societal model, build the digital citizenship generation, aiming to achieve these objectives through programs and international partnerships in order to provide an effective moral model.