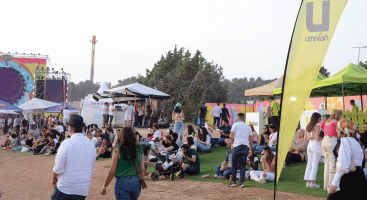 June 17, 2022 – Amman, Jordan: Umniah announced its exclusive sponsorship of the 5th Summer Jam festival, held at Amman's Dunes Club on May 27 that was attended by approximately 5,000 youths.

Speaking about the sponsorship, Umniah CCO Zaid Al-Ibrahim stressed the importance of sponsoring this festival, which is one of Jordan’s chief artistic and musical events, especially in light of the restrictions placed on such activities during the coronavirus pandemic. Al-Ibrahim went on to add that Umniah has been a long-time champion of the youth, who make up a large percentage of its subscriber base.

According to Al-Ibrahim, Umniah has placed the unique needs of Jordan’s youth at the top of its list of priorities, offering them services and solutions that have been formulated based on their opinions and suggestions and that allow them to operate to their full potential.

The festival, which was organized by Beats Events Production, included the participation of 14 Jordanian and Arab DJs, eight artistic groups including Khair Group and Octave, as well as performances by Arab and Jordanian artists including Ali Luka, Noel Kharman, Dana Salah, Hana Malhas and rapper Synaptic.

During the ceremony, a team from Umniah introduced attendees to the company’s UShababi lines, the USales app, the UWallet application, as well as a number of other high-value services and solutions available to the youth in the Jordanian telecommunications market.