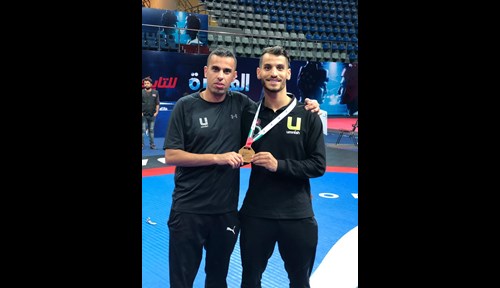 Umniah Sports Ambassador Ahmed Abu Ghosh wins gold medal in Fujairah International Taekwondo Championship Amman - Jordan's Olympic sports champion, Ahmed Abu Ghosh, won the gold medal at the Fujairah International Championship from February 1 to 3, adding a new international achievement to his record. Abu Ghosh took part in the national team's first Taekwondo tournament in the one-star championship, the first of the team's during the new year. The seventh edition of the Fujairah International Taekwondo Open was held in the UAE with a total of 1,254 players representing 80 teams from 40 countries. The CEO of Umniah, Eng. Ziad Shatara, expressed his pride for the continuous achievements of the Jordanian Olympic champion and Umniah Sports Ambassador Ahmed Abu Ghosh, affirming its continued support for him, until he reaches the Tokyo Olympics in 2020. Commenting on this new achievement, Umniah CEO Ziad Shatara said: "We are proud of Umniah's achievement and our Jordanian champion Ahmed Abu Ghosh winning the gold medal at the Fujairah International Championship. Abu Ghosh and our national Taekwondo team raised the country's name at this important sports venue", emphasizing the continued support of Umniah's for the hero Abu Ghosh, who has become an example for many young people in achievement, giving and excellence. Shatara also expressed his thanks and appreciation for the efforts of the national team coach Faris Al Assaf, who is supported by Umniah for the third consecutive year, alongside Ahmed Abu Ghosh. Umniah's support for the Jordanian hero Abu Ghosh is a clear embodiment of Umniah's corporate social responsibility strategy aimed at enhancing the potential of Jordanian youth and enabling them to develop their talents in order to make a positive impact on Jordanian society as a whole.