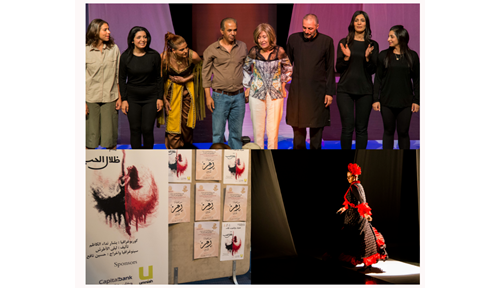 Umniah sponsors “Thilal Al Hob” theatrical show Amman, 2 July 2019 As part of its continuous efforts to support artistic and cultural activities, Umniah sponsored “Thilal Al-Hob” play, by the Jordanian novelist Laila Al-Atrash. The play was held during the Rum Theatre Festival during its second year at the Royal Cultural Center and which will continue until the 2nd of July. The play "Thilal Al-Hob", by the Jordanian director Hussein Nafi’, portrayed women's subjective experiences with a focus on social repression, interpretation and intellectual endeavors. The theatrical dialogue, which included expressive paintings and rhythmic movements, centered on women role models throughout the ages from different places and cultural periods, starting with Hind bint Otbah, then Zenobia Queen of Palmyra and the literary icon Mai Ziadeh, as well as the fighter Jamileh of Algeria. The play highlighted the problems of women in areas of war and conflict at the present time, beginning with the Iraqi media martyr woman, the Syrian refugee woman and the Palestinian mother. Commenting on the sponsorship, Umniah CEO Ziad Shatara said: "Our sponsorship of the play “Thilal Al-Hob” represents a continuation of our targeted efforts to support quality artistic and cultural activities in the Kingdom, which directly contributes to enriching the artistic taste of the Jordanian community", pointing to the importance of Jordanian theater that has achieved remarkable progress in the past few years. Shatara further stated that the play “Thilal Al-Hob” for the exceptional novelist Laila Al-Atrash is considered to be amongst the unique theatrical works due to its discussion of concepts that differ from Arab women’s reality. He emphasized that Umniah is one of the companies that strongly supports Jordanian women and seeks to empower them and develop their capabilities. It’s worth mentioning, that Umniah is one of the leading companies that support the artistic and cultural movement in the Kingdom and has a clear footprint in this field. The company has already supported a number of initiatives and artistic bands, and has formed strategic partnerships with local artistic entities such as Al Balad Theater and “Baladak” Graffiti Festival, as well as musical ensembles such as "Tajalli”, “Al-Shurufat” and “Harget Kart”. Umniah has further supported the setting up of a number of concerts for renowned artists such as Majida El Roumi and Omar Kamal.