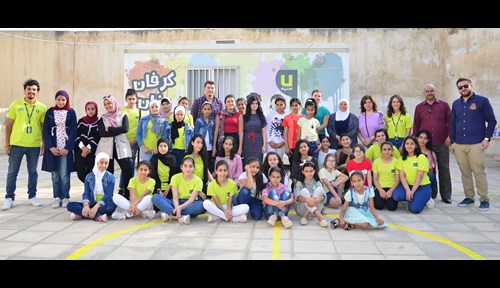 Umniah sponsors The Arab House Cultural Forum initiative and opens a library in Caravan Razan Amman, xx July 2019 Umniah has sponsored the "Summer Only Livens Up with My Library" initiative organized by the Arab House Cultural Forum for the second year in a row in cooperation with the Greater Amman Municipality- Library Department. The initiative aims to encourage children in underprivileged areas to read by launching a reading challenge competition for students participating in the initiative until the end of August. The initiative comes as part of Umniah’s continuous efforts to support the education sector, contribute to raising students' efficiency and increase awareness of the importance and impact of reading on the individual and its consequent positive influence on society. The initiative’s founders visited 11 libraries of the Greater Amman Municipality, whereby the Arab House Cultural Forum presented a number of valuable books to Caravan Razan, one of Umniah's leading educational projects, with the aim of opening new interactive channels for students to read and participate in the competition. The Arab House Cultural Forum, in cooperation with Caravan Razan, will host the small reader competition and the winners will be chosen by a jury composed of members of the Forum and a representative from Umniah. Commenting on the initiative, Umniah CEO Ziad Shatara expressed his appreciation for the efforts of those who are working on this initiative, which aims to educate and motivate children to read, especially those in underprivileged areas. This, in turn, is considered to be one of the best approaches to instill positive values and evaluate their behavior, as well as enrich their knowledge with all that is new in the world. Shatara pointed out that Umniah is considered as one of key the pillars of sustainable development in the Kingdom. Umniah also strongly believes that all sectors of society should have equal access to education, indicating that stimulating and encouraging children to read strengthens their desire to read and further develop their reading skills. Mirna Hatouqa, Secretary-General of the Arab House Cultural Forum and the initiative coordinator, highly praised Umniah’s support for the "Summer Only Livens Up with My Library" initiative, pointing out that it carries many values and noble goals about encouraging and motivating students to read continuously out of a desire to learn and explore the truth. Hatouqa emphasized the importance of reading for students as it enriches their imagination and expands their perceptions, thus helping to motivate them to create and innovate. On her part, Umniah’s Education Ambassador Razan Khilfeh thanked the Arab House Cultural Forum for their donation of a number of valuable books and the establishment of a mini library in Caravan Razan, explaining that these books will support efforts to give underprivileged students fair opportunities to access education and culture. She further commended the role of Umniah as an active supporter of the education sector within the Kingdom. It worth noting that Umniah adopted Razan Khilfeh’s voluntary initiative of teaching students in underprivileged areas free of charge, whereby Umniah has provided a fully equipped caravan to receive students who need reinforcement classes in non-traditional ways in English, Arabic and mathematics. Caravan Razan has graduated more than 200 female students in the last few years. -End-