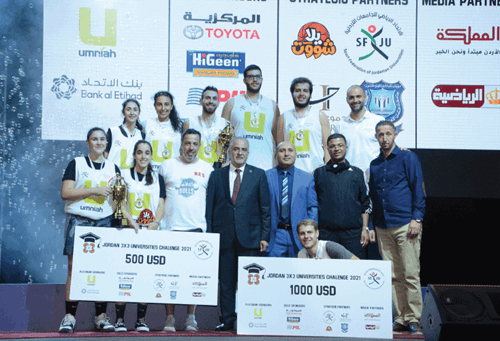 August 29, 2021 – Amman, Jordan: Umniah sponsored the first Jordanian 3×3 basketball championship for universities, which took place on August 25 and 26, and saw the participation of 24 male and female teams from Jordanian universities.

The tournament, which is in line with Umniah’s avid belief in the importance of supporting athletics for the youth, was organized by SportsologyME in partnership with the Sports Federation of Jordanian Universities and was held at Al-Ahliyya Amman University’s sports complex. At the end of the tournament, the top two teams with the highest number of points and that qualified for the semi-finals were presented with awards.

Umniah strongly believes that inspiring creativity among the country’s youth through activities that make the most of their vitality and energy creates a powerful and positive force for change, giving rise to a generation capable of transforming challenges into opportunities.

Umniah Marketing Director Zaid Al-Ibrahim said that the company’s support for the tournament reflects the focus on youth and sports in its corporate social responsibility strategy. According to Al-Ibrahim, Umniah champions programs that focus on sports and that help develop the mental and physical abilities and skills of the players as well as offer them the chance to compete on a global level. Al-Ibrahim went on to stress that athletics for the youth are an integral part of achieving sustainable development, adding that Umniah has always championed that goal through partnerships with Jordanian athletes, who have gone on to become the company’s brand ambassadors.

SportsologyME, which was established in 2016, specializes in sporting event management and activities that allow athletes to apply what they have learned from their experiences in a competitive environment.