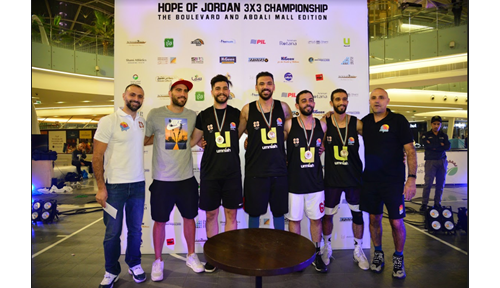 Umniah Sponsors “Hope of Jordan” 3x3 Basketball Championship Amman, Jordan, 15 October 2019: Umniah sponsored the “Hope of Jordan” 3×3 Basketball Championship that kicked off last Thursday under the organization of Hope Jordan and with the participation of 192 male and female players. The championship, which ended on Saturday 12/10 evening, was held on dedicated playgrounds at The Boulevard and Abdali Mall, and included four categories: Boys ‘Under 18’ category, Men ‘Amateurs’ category, Men ‘Professionals’ category and Women ‘Open’ category, with 12 teams under each category. The sponsorship is in line with Umniah’s strong support of sports and youth, as the company believes in the need to support these two sectors and invest in them, in order to create and nurture a creative and productive generation that can serve its country and community, and has the ability to face challenges and create opportunities. Commenting on the championship, Umniah Marketing Director Zaid Ibrahim said Umniah has a keen interest in the Jordanian sports sector and strong desire to support official efforts aimed at reinforcing the country’s presence on the international sports map and propelling young athletes to the international arenas of professional sports. According to Ibrahim, Umniah’s interest in the youth sector is in line with the company’s corporate identity, and reflects its continuous efforts to empower the youth, develop their skills and abilities, and prepare them to build the future. Founded in 2016 by Ramez Kawar, Hope of Jordan 3×3 Basketball Championship witnessed the presence of famous Serbian player “Dušan Bulut” as honorary guest. Bulut, who is currently ranked world number 1 in men’s individual 3x3 rankings, presented the championship prizes to the winners in each category. Bulut is a four-time winner of the 3x3 World Tour and a two-time winner of the Europe 3x3 Championship. -End-