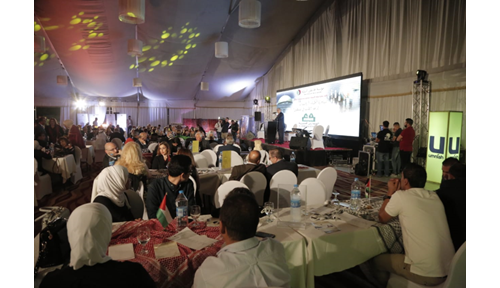 Umniah Sponsors a Charity Dinner for the Palestine International Institute October xx, 2018 – Amman, Jordan: Umniah sponsored the fourth charity dinner held by the Palestine International Institute (PII) under the patronage of former Jordanian Prime Minister Dr. Abdelsalam Majali at the Crowne Plaza Hotel. The event, which was organized in support of the Jordanian Doctors in Support of Medicine in Palestine, and the attendance of Palestinian Minister of Health Dr. Jawad Awwad, Chairman of the Board of Directors of the Palestinian Trade and Industrial Trade Unions Khalil Rizq, as well as a number of Jordanian officials, intellectuals, writers, literary figures and journalists. The Palestine International Institute (PII) launched its program this year in order to "fulfill the urgent medical needs in the occupied homeland," from which the Jordanian Doctors in Support of Medicine in Palestine" was born in 2015. As part of the initiative, hundreds of physicians from various specialization, nurses, and persons working in the medical fields from both the West Bank and the Gaza Strip were trained in Jordanian hospitals. Through their experience, they are better placed to offer their services and experience to patients and people in need of care in Palestine. Umniah CEO Ziad Shatara spoke of his pride with the support extended the Palestine International Institute (PII), meeting the urgent medical needs of the people of occupied Palestine. He also spoke of the incredible support offered by Jordanian Doctors in Support of Medicine in Palestine, an organization that has trained hundreds of Palestinian doctors and nurses. The organization has also been active in preparing studies and offering services that bridge the communication and exchange of benefits between Palestinians and the outside world. Shatara stressed that Umniah continuously supports initiatives with honorable humanitarian objectives as part of its conviction in their importance and their role in achieving comprehensive development, which are clearly reflected in the company’s corporate social responsibility strategy. During the event, poems by the prominent Palestinian poet Haidar Mahmoud were recited, and artist Nadine Ayman Tayseer sang a number of nationalist and popular songs. - End-