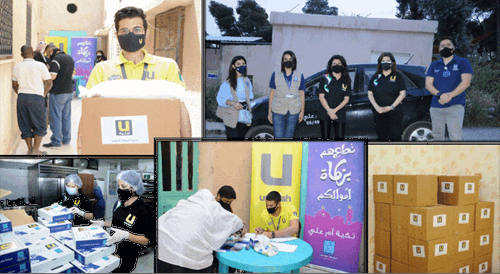 Amman 25th April 2021: Building on its strategy related to social responsibility and commitment toward achieving the Sustainable Development Goals (SDG’s) mainly related to eradicating poverty and hunger; Umniah has launched its Annual Ramadan campaign “Umniah Al Khair”, in cooperation with Tkiyet Um Ali and Naua platform, one of the Crown Prince Foundation's initiatives.

The Ramadan campaign will be implemented in two tracks; the first track will see the direct distribution of food parcels to underprivileged families. The second track “The Holy month Ramadan Project”, will see the sponsorship of 67 households living in extreme poverty by Umniah for a whole year, the 67 households endorsed by Tkiyet Um and located in Amman and Zarqa will be receiving food parcels on monthly basis and throughout the year starting April 2021- April 2022, throughout this project over 1000 food parcels will be distributed.

Tkiyet Um Ali is a Jordanian NGO, established in 2003, aiming to eradicate hunger in Jordan through its sustainable food aid program targeting households living in extreme poverty throughout the Kingdom. Households receive food parcels on monthly basis and throughout the year, each parcel contains food commodities enough to fulfill the nutritional needs of these households throughout the month.

Since its launch in the Jordanian market, Umniah has adopted “Umniah Al Khair” initiative as the main umbrella for its social responsibility programs, that aim to support a number of community and development initiatives throughout the year which in return reflects positively on the development of the society.

Umniah’s CEO Ziad Shatara highlighted Umniah’s pride in the partnership with Tkiyet Um Ali and Naua, as the goals and plans of these two institutions intersect with the Umniah’s goals and its social mission through which it seeks to contribute to achieving sustainable and comprehensive development.

Shatara affirmed Umniah's commitment to implementing its social responsibility programs that include supporting charitable and humanitarian initiatives, events, and organizations, believing in the importance of consolidating the values of giving and supporting in the Jordanian society and enhancing social bonds. These values are considered the infrastructure for launching “Umniah Al Khair” campaign, the main umbrella under which all social responsibility programs are carried out throughout the year, especially during the holy month of Ramadan.

Shatara praised the extensive efforts of Tkiyet Um Ali, since the outbreak of Corona pandemic which had negative impact on the economic sector in general and most of the Jordanian community mainly the daily laborers, highlighting that these exceptional circumstances require unifying the efforts of individuals, companies, civil society organizations and charitable humanitarian bodies until we achieve a safe society with minimum damage.

He also expressed his pride in the partnership between Umniah and Naua platform, one of the Crown Prince Foundation's initiatives, which implements Umniah’s social responsibility, evaluates and incorporates it in Naua’s annual report which showcases the number of beneficiaries and the main categories benefiting from these initiatives. Highlighting that Umniah and based on the latest report issued by Naua, ranked first in supporting the health sector and third in charitable work, and ranked fourth in terms of the value of total support provided to projects at the platform level.

Ahmed Al-Zoubi, CEO of Naua, praised the social responsibility programs of Umniah which showcases its responsible role in supporting the community, highlighting Umniah’s clear role in the humanitarian and charitable work which in return succeeded in achieving 10 of the sustainable development goals of the United Nations mainly concerning poverty, hunger , health and education enhancement.

Umniah has launched its “Umniah Al Khair” campaign 12 years ago, the campaign succeeded in achieving hundreds of charitable and humanitarian activities like, food parcel distribution, Ramadan iftars, in addition to implementing projects for individuals and corporate in poverty pockets to achieve sustainability and create a source of income for individuals.