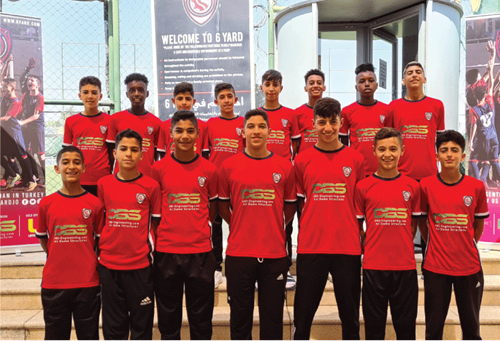 Amman — Sept 5, 2021: Umniah has announced its official sponsorship of the 6 Yard Junior Soccer Team as a part of its commitment to support young athletes. The 6 Yard Team participated and won in third place in the Turkish International Cup, held from September 1 to 5 in Kartepe- Turkey. The 6 Yards Team, consisting of 16 players under the age of 15, played against several European elite teams after winning the qualifying tournament held in Jordan last year.

Umniah is among the national brands actively supporting the sports and youth sectors, considered among the most crucial in the context of sustainable development. Umniah believes that investing in young people and facilitating their paths to self-actualization will have a lasting effect on development in Jordan, helping to foster a generation of driven, excellence-minded individuals.

Commenting on this sponsorship, Umniah Marketing Director Zaid Al-Ibrahim underscored how proud Umniah has been of its sponsorship of the 6 Yard Junior Team, whose members consistently demonstrated their commitment and impressive athletic abilities after qualifying during last year’s competitions. Al-Ibrahim also stressed Umniah’s commitment to accelerating the development of sports in Jordan and to supporting athletes who have the potential to excel on a global level.

Umniah is considered one of the most prominent private sector brands with a rich track record of continuous support to both sports and youth. This support has manifested in a multitude of projects and initiatives over the past year, including partnerships with renowned young athletes such as Mustafa Salama, Ahmed Abu Ghosh, and others who became the brand’s sports ambassadors.