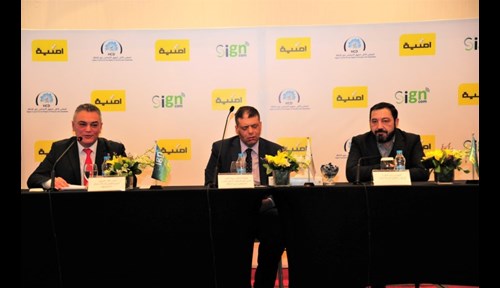 January xx, 2018 – Amman, Jordan: As part of its continuous efforts to implement comprehensive methodologies that support startups and motivate the spirit of entrepreneurship among Jordanian youth, Umniah signed a partnership and support agreement with SignCom at the Holiday Inn in Amman. SignCom has developed a strong, expandable and flexible business model to manage and provide translation services for the hearing-impaired using VRI video in order to increase participation by deaf and hearing-impaired people, and to integrate them in society. The agreement signing, which attended by Secretary General of the Higher Council for the Affairs of Persons with Disabilities (HCD) Muhannad Al-Azza, also saw the participation of SignCom General Manager Ra'fat Al-Saifi and Umniah's CEO Ziad Shatara, as well as a number of officials from both sides. At the signing ceremony, Shatara said, "Since its launch in the Jordanian market, Umniah contributed effectively to pioneering initiatives and projects that have tangible and positive effects that transcend narrow limits to include all groups and sectors in the community." He stressed the importance of startups in motivating economic growth and sustainable development. Shatara added that Umniah, through its business innovation center The Tank, adopts and encourages the spirit of business entrepreneurship among youth, helping them implement their original ideas on the ground. He noted that the partnership with SignCom falls in line with Umniah's strategy and efforts to support entrepreneurs and entrepreneurship. Shatara asserted that SignCom is a model for successful companies, with its innovative idea that captured a niche in the market. He added that as the project reinforces the rights of the hearing-impaired by providing them with visual communication services through cutting-edge applications and communications technology, he is certain it will enjoy wide proliferation not only in Jordan, but at a pan-Arab level as well. Shatara noted that SignCom's work represents an effective model that encourages support as well as technical and technological guidance "which is what we at Umniah plan to do." Shatara also announced that Umniah will be providing the visual communication service through all its branches throughout the Kingdom for the hearing-impaired. At the ceremony, Al-Saifi said, "We are happy to launch our pioneering translation for the hearing-impaired services to the Arab world from Jordan. SignCom has developed a business model and a flexible application that enables the hearing-impaired to communicate with people anywhere in the world." He added, "We provide smart solutions to assist the hearing-impaired and to aid their integration in society, launching their innovations. This way, we will have contributed to serving our community and helping find suitable solutions through our company’s mission, which is to provide sign language, high quality, and professional communications services for a better life." - End-