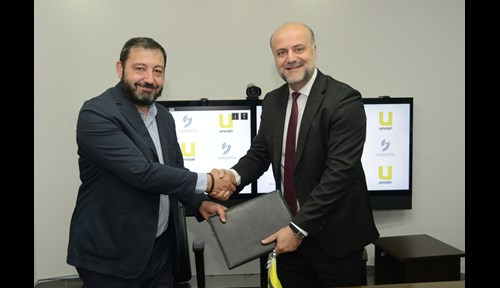 Following the success of the first phase of the Ministry of Education’s School Connectivity Project Umniah Signs Agreement with Waseela to Complete Second Phase of Schools Interconnection Project Amman, Jordan, 14 November 2019: Umniah, a subsidiary of Batelco Bahrain, has signed a cooperation agreement with Waseela for Integrated Telecommunications Solutions, to complete the implementation of the second phase of the Ministry of Education’s School Interconnection Project, which will support an additional 800 schools over the 2,400 schools, which have been interconnected to the project during the first phase, covering the entire Kingdom. Under the cooperation agreement, Waseela will supply and install the data links network, as well as provide technical support for the second phase of the project, which is considered the largest in the Middle East region, using Microwave access technology, so that Umniah can manage and operate the MPLS service and contribute to fulfilling its commitment to the project towards the Ministry of Education and the Special Communications Commission. The agreement was signed on behalf of Umniah by its CEO, Ziad Shatara, and on behalf of Waseela for Integrated Telecommunications Solutions by its CEO, Bilal Al-Anani, in the presence of senior officials from both companies, and is considered an extension of the successful implementation and operation of the first phase of the project. Commenting on the agreement, Umniah CEO Ziad Shatara praised the efforts made by Waseela to successfully implement the first phase of the Ministry of Education’s School Connectivity Project in a record time, noting that Umniah follows high standards and stringent criteria when selecting subcontractors, and Waseela had already completed many successful projects for Umniah using its unique microwave technology. Shatara explained that choosing Waseela to carry out the second phase of the School Connectivity Project came after it successfully passed the technical evaluation by Umniah. Shatara mentioned the many benefits of the first phase of the project, which included providing a communications network that enabled Jordanian schools and all Ministry directorates to communicate with each other through the network, in addition to providing visual communication units among the Ministry and its various directorates, and strengthening control over the Ministry’s warehouses. Shatara explained the role played by this project in creating and developing the Ministry of Education’s electronic connectivity network, as well as enhancing the Ministry’s readiness and ability to computerize its exams in the future and move towards e-learning. Waseela CEO, Bilal Al-Anani, expressed his company’s pride in the trust given to them by Umniah for the implementation of the Ministry of Education’s School Connectivity Project, which is one of the many projects executed by Waseela in Jordan, and reflects the company’s strong desire to contribute to the government’s efforts for digital transformation in Jordan. Al-Anani said that Waseela continues to implement large and qualitative projects across the Middle East region, in accordance with the highest international standards and in line with the aspirations of its partners among local and regional telecommunications companies. -End-