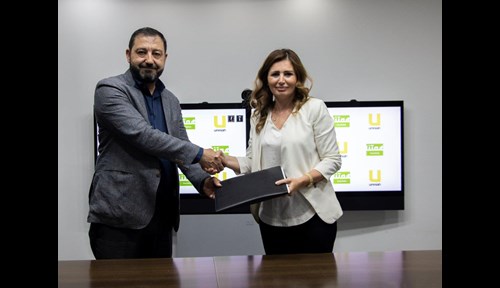 Umniah’s umnicoin program supports “Himmetna” initiative for cancer patients at Al-Bashir Hospital Amman, xx May 2019 As part of its sustained humanitarian outreach efforts, and in line with its Umniah Al-Khair campaign, Umniah has signed an agreement to support the “Himmetna” initiative to rehabilitate the Oncology and Blood Department at Al-Bashir Hospital. Under the agreement, which was signed by Umniah's CEO, Ziad Shatara, and the CEO of “Himmetna”, Dr. Fadia Samara, Umniah will be offering its customers the opportunity to donate to the initiative after adding it to their umnicoin Rewards Program and then donating its value in support of the initiative. Following the signing of the agreement, Shatara praised the “Himmetna” initiative, which is the first of its kind to serve the most disadvantaged groups of cancer patients and provide them with fair treatment in a safe environment according to the universally accepted health standards in cancer treatment. He said that Umniah has been launching many humanitarian and social initiatives with noble goals, and always encourages its customers to participate. He concluded by saying that Umniah committed itself to supporting the community by all possible means to achieve positive change and create sustainable development, as well as encouraging its customers to support social and humanitarian initiatives that are consistent with the company's vision. He further stated: "We are proud today to allow our customers to donate, through umnicoin, to our initiative to build a healthier society by improving public facilities and ensuring that patients receive appropriate treatment in safe conditions.” He also expressed his confidence in Umniah’s customers to proactively respond to support this humanitarian initiative, as well as other initiatives supported by the company. For her part, Dr. Samara praised Umniah's active corporate social responsibility strategy, and stated: "In addition to its role in promoting the Jordanian telecom sector, Umniah has demonstrated its good citizenship through its support for many quality social and humanitarian initiatives. We are happy today to harness its potential and provide support to us by offering our customers the opportunity to donate to our initiative, which aims to rehabilitate the Oncology and Blood Department at Al-Bashir Hospital.” She further noted that Umniah has been a role model in supporting various initiatives and civil society institutions. It is worth noting that the “Himmetna” initiative provides the appropriate place for the treatment of less fortunate cancer patients through the rehabilitation of the Department of Oncology and Cancer in Al-Bashir Hospital and the provision of state-of-the-art medical equipment on the one hand, as well as seeking to provide qualified and trained personnel to develop the appropriate treatment plan for patients and provide optimal health care on the other. This in turn will inevitably improve their chances of treatment and alleviate the symptoms associated with their treatment journey. Umnicoin is a digital reward program that allows all Umniah customers to redeem the points collected in any of the company's services or the services of their partners, in addition to the possibility of donating them to charitable organizations such as the “Himmetna” initiative, the King Hussein Cancer Center, the Royal Health Awareness Society and the Jordan Hashemite Charity Organization.