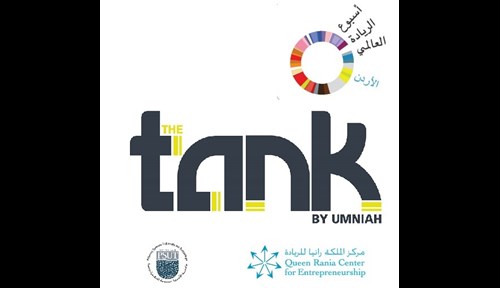 On the Sidelines of Global Entrepreneurship Week Umniah's The Tank is the Golden Sponsor of the Jordanian University Students' Entrepreneurship Competition Ibrahim: "Umniah plays an effective role in supporting entrepreneurship and innovation in the Kingdom" November 14, 2018 – Amman, Jordan: The Tank, Umniah's entrepreneurship and innovation incubator, has announced its golden sponsorship of the Jordanian University Students' Entrepreneurship Competition. Organized by the Queen Rania Entrepreneurship Center in November of every year, Global Entrepreneurship Week is an annual event that sees the attendance of representatives of over 160 countries who come together to celebrate entrepreneurship and innovation. This year, the conference has put together a slate of wide-ranging and enriching activities that aim to provide innovators with the opportunities to create viable projects, pushing economic growth and achieving sustainable and comprehensive development. During this year’s competition, which took place between November 12 and November 18, 90 teams from seven Jordanian universities including Princess Sumaya University for Technology, Al-Hussein Technical University, Yarmouk University, Arab Open University, Jordan German University, and the University of Jordan, presented their innovative ideas, and participated in training sessions that helped them develop their ideas further as well as techniques on how to present their projects in an engaging manner. The Tank, in recognition of its pioneering role in supporting innovation and the business environment throughout the Kingdom, was selected to host the final activity, which saw the selection of the winning idea from among the participating universities. Umniah Marketing Director, Zaid Ibrahim spoke of the company’s pleasure at sponsoring the conference, as well as hosting the final session, saying, "At Umniah, we take pride in the fact that we are the golden sponsors for the final round of the entrepreneurship competition for university students, which is set along the sidelines of Global Entrepreneurship Week. The conference is the largest to be held at the international level celebrating innovation and entrepreneurship, and it where innovative and pioneering ideas that can be turned into realities that contribute to improving economic growth and expanding the scope of beneficial social activities." He spoke of his admiration at the work of the Queen Rania Center for Entrepreneurship in developing and supporting technical business entrepreneurship in the Kingdom through the Technical Businesses Entrepreneurship Initiative, which focuses on networking, developing awareness, training, support and financing. Ibrahim went on to add, "In the final round of the competition, The Tank provided finalists with the opportunity to earn financial, technical and technological support in order for them to turn their ideas into income-generating projects. We also worked with the finalists in order to highlight the ideal ways for them to expand their customer base and the potential for networking with foreign investors by offering them the opportunity of participating in international conferences, as well as providing them with the necessary experience and skills to manage their projects.” Ibrahim emphasized that Umniah's entrepreneurship and innovation incubator plays a fundamental and effective role in supporting hundreds of Jordanian entrepreneurs through its modern and advanced infrastructure and highly efficient training methods, in addition to providing a fertile environment that promotes creativity and innovation. Mohammad Obaidat, director of the Queen Rania Center for Entrepreneurship, underlined the importance of increasing youth awareness in the field of entrepreneurship, helping them develop their work ethic in order to upgrade the country's economy and increase national productivity. -End-