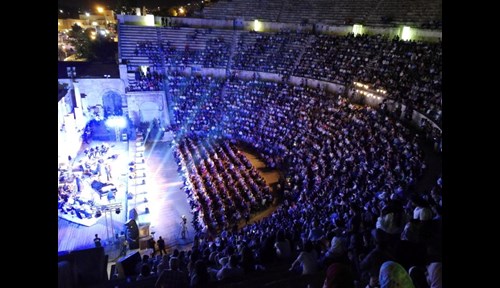 Amman, July xx 2017 As part of its continued efforts to support the arts and culture in the Kingdom, Umniah recently presented a major concert for renowned artist Omar Kamal at the Roman Amphitheater, organized by the Friends of Jordan Festivals. This initiative falls in line with Umniah’s strategy that seeks to solidify Jordan’s presence on the global cultural landscape and to contribute to bolstering the local tourism sector by reinforcing the Kingdom’s image as an attractive destination for musical and cultural events. “Palestinian artist Omar Kamal is considered one of the most prominent Arab artists with an ever-growing following and a clear impact on his community,” commented Umniah’s CEO Ziad Shatara. “Umniah’s support for Kamal stems from a staunch commitment to supporting young talent and underscoring the critical role art and culture plays in the evolution of our society.” Shatara added that Umniah, which has become one of the most successful telecom operators in Jordan, believes that supporting the local and regional youth is a fundamental investment that can have a lasting positive impact on the future of the region, especially considering the fact that Jordan is a wellspring of talented artists who rely on such support to nurture and grow their craft. This commitment, he noted, is amply reflected in Umniah’s slogan, “Belong,” which emphasizes the idea that supporting local talents is a potent and far-reaching form of patriotism and public service. “We are proud to partner with Umniah to deliver this unique artistic performance, and to add yet another successful event to the local cultural landscape,” commented Souha Bawab, CEO of Friends of Jordan Festivals. “Our primary objective is to organize events that showcase the many remarkable talents in Jordan and the region alike as well as our diverse cultural heritage, which not only strengthens Jordan’s cultural contributions on an international scale but also facilitates the process of cultural exchange and global understanding.” Often referred to as the “Arab Frank Sinatra,” Omar Kamal’s music features a bold and truly distinct style with a wide array of influences ranging from Sinatra, Michael Jackson, Fairouz, Mohammad Abelwahhab, and others. His music is unique in its attention to production and arrangement, delivering a sound that has become celebrated for its international elements and Kamal’s impressive vocal range. END