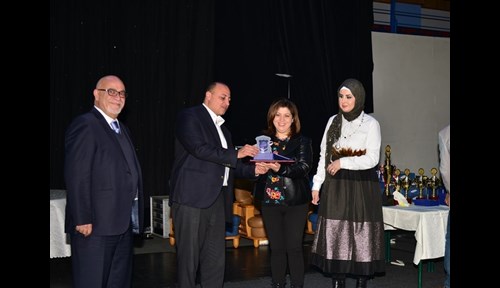 Umniah participates in the second season of the Arabic Language Olympiad at Al-Ahliyya Amman University Amman, 30 March 2019 In line with one of its main corporate social responsibility (CSR) pillars of empowering youth and developing their skills, Umniah participated in the second season of the Arabic Language Olympiad organized by the Al-Ahliyya Amman University (AAU), under the patronage of the President Jordan Academy of Arabic Language Dr. Khalid Al-Karaki and in the presence of a large number of faculty and administration, in addition to a number of Jordanian distinguished artists. Rula Nasraween from Umniah's Corporate Social Responsibility department participated in the jury, which included 24 Arabic experts and specialists. The second season of the Olympiad, in which 22 schools competed from March 21st to 23rd, was held in the Arena Hall at Al-Ahliyya Amman University, with the aim of preserving the Arabic language and developing students' skills in grammar, literature, spelling, dictation, and the ability to converse in classical Arabic. Commenting on the sponsorship, Umniah CEO Ziad Shatara said: "We are proud to be one of the sponsors of the Arabic Language Olympiad in its second season. This is consistent with Umniah’s CSR strategy that includes supporting various segments of society, empowering them and developing their skills and abilities. " Shatara added: "The Arabic Language Olympiad is one of the most beneficial and fruitful competitions for these youth. It demonstrates the importance and standing of the Arabic language, as well as promoting pride in the language. To this end, and in commemoration of Mother Language Day, we at Umniah recently launched The8log, which celebrates our Mother Language and its role through seeking to enrich Arabic electronic content. " At the end of the Olympiad, Umniah presented valuable prizes to the winning teams and decided to publish outstanding students' participation in the Arabic Language Olympiad on The 8log. The End -