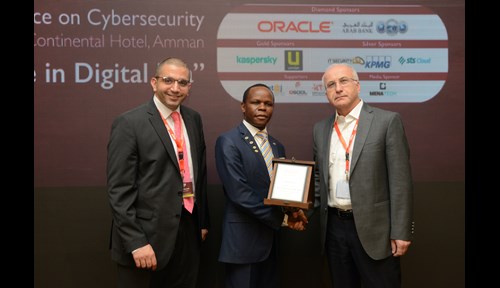 Umniah Participates in Leading Cybersecurity Conference by ISACA Amman Chapter The conference titled ‘Cyber Resilience in Digital Era’ is the first of its kind to be held in Jordan Amman, Jordan, 17 September: In line with its commitment to cybersecurity and Managed Security Services (MSS), Umniah, a subsidiary of Batelco Bahrain, has recently participated in the first national cybersecurity conference held by the Information Systems Audit and Control Association (ISACA) in Amman. Experts from Umniah and a number of local and international experts took part in the event, which was held on 16 and 17 September, to discuss the latest international trends in cybersecurity in the digital age. Commenting on the event, Umniah’s CEO Ziad Shatara said: “Umniah actively seeks to emphasize its role in assisting public and private organizations in protecting their data from potential cyber threats, as well as helping them to comply with the requirements of regulators, such as the Central Bank of Jordan and the Ministry of Digital Economy and Leadership.” Shatara praised the vital role ISACA plays in raising awareness about information security and cybersecurity, and keeping abreast of the latest developments in the information technology sector. “As part of its role as golden sponsor of ISACA, Umniah supports the association’s efforts in educating organizations about the importance of protecting their data and training their staff on the various tools and technologies of cybersecurity, especially in light of the high market demand for qualified labor in this field,” Shatara noted. Shatara added that Umniah continuously strives to maintain its pioneering role in the area of information security, notably with the launch of the AI-powered Umniah Intelligent Security Operations Center (iSOC), the first center of its kind in Jordan working around the clock to help companies monitor, analyze, and respond to cyber threats. By sponsoring ISACA’s monthly workshops, Umniah seeks to highlight the importance of cybersecurity for companies in Jordan. Umniah has received many awards for its exceptional efforts in the field of cybersecurity, including the ISO27001 certification for its state-of-the-art, AI-powered Umniah Intelligent Security Operations Center (iSOC), and the Best Managed Security Service Provider (MSSP) by Fortinet, a global leader in cybersecurity solutions. - End -