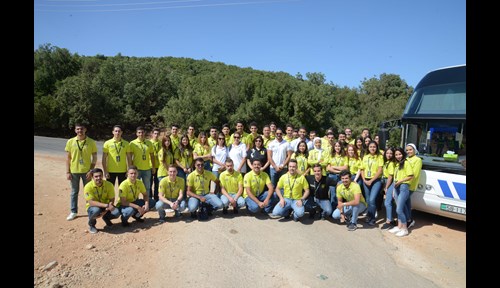 Umniah Participates in ‘Himmeh w Lammeh’, a Nationwide Cleanup Campaign Amman, Jordan, September 30, 2019: Umniah has announced its participation on September 28th in ‘Himmeh w Lammeh’, a nationwide cleanup campaign launched by the Jordan Inbound Tour Operators Association (JITOA) to mark World Cleanup Day and World Tourism Day. Employees from Umniah and members of the Umniah Youth Unit took part in the initiative by donating their time and energy to collect waste in Ajloun Forest Reserve. Umniah’s participation in ‘Himmeh w Lammeh, in cooperation with NAUA, one of the Crown Prince Foundation’s programs, comes under the company’s flagship social responsibility program, Umniah Al Khair. The campaign aimed at having 1 million volunteers help clean up around 50 tourist, heritage and natural sites across Jordan. The ‘Himmeh w Lammeh’ campaign aims to highlight the importance of the tourism sector for the Jordanian economy, as well as draw attention to improper waste disposal practices. The campaign seeks to highlight the gravity of the littering problem and raise awareness of the importance of tourism as a key sector directly contributing to creating jobs, as well as instill a culture of volunteerism among Jordan’s youth. Umniah’s CEO, Ziad Shatara, expressed his pride in the participation of employees and volunteers from the Umniah Youth Unit in the initiative, noting that Umniah’s support of this and similar initiatives stems from its sense of responsibility towards its community. “Umniah’s participation in the ‘Himmeh w Lammeh’ initiative is in line with the company’s corporate responsibility strategy and a direct application of Umniah Al Khair, a social responsibility program dedicated to support various initiatives that aim to achieve sustainable social development in Jordan,” Shatara said. “We would like to extend our gratitude to the organizers of ‘Himmeh w Lammeh’ and praise their efforts in finding solutions to the problem of littering in Jordan by reinforcing the values of communication, volunteerism and solidarity among members of the community, inspiring youth and preparing them to become active members of their society,” Shatara added. Umniah launched a volunteering program in early September, as part of Umniah Al Khair, in order to promote young people’s sense of responsibility to make a positive change in their society by tapping into their potential, unleashing their creativity, and dedicating their time to grander goals. -End-