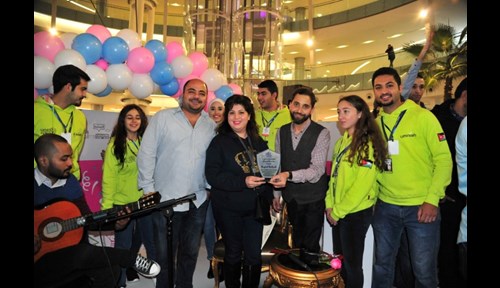 January xx, 2018 – Amman, Jordan: As an integral part of its corporate social responsibility strategy, Umniah has taken part in the second Hareer initiative, which was established by hairdresser Nihad Dabbas. The initiative collects hair that is then fashioned into comfortable wigs for children fighting cancer, and was launched after Dabbas met a child battling the disease who was unhappy about his hair loss that came as a side effect of his chemotherapy treatment. The initiative aims to encourage children to donate locks of their hair to create wigs for youngsters fighting cancer. Dabbas explained that, through this initiative, he wants to put smiles on the faces of children battling, adding that the enterprise also helps strengthen the participation of children in local society by encouraging them to volunteer. As a show of support for children battling cancer and this noteworthy initiative, Umniah employees as well as a team from Umniah's University Shabab team donated locks of their hair at an activity organized at Abdali Mall. Speaking at the collection drive, Umniah Director of Communications Wajeeha Al-Husseini said, "The Hareer initiative is one of the most noble humanitarian initiatives launched in Jordan, and Umniah’s reasons for participating are twofold. First, we recognize that drives such as this one strengthen the culture of volunteerism and social service among the public, both for children and adults. And secondly, we are happy to contribute to anything that helps alleviate the negative side effects of chemotherapy and other treatments that children with cancer suffer from, particularly hair loss." Al-Husseini added, "Since its launch in the Jordanian market, Umniah has been eager to support and to participate in humanitarian initiatives that have a positive impact on communities, which is a fundamental part of the company's social objectives." - END -