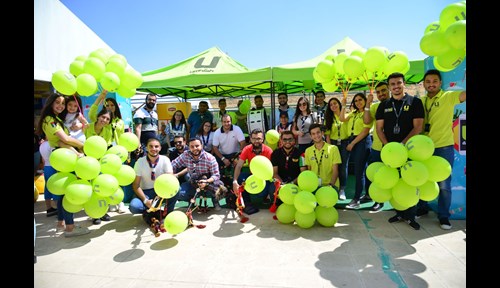 Umniah participates as bronze sponsor in the annual Charity Food Festival by ICS Amman, 18 June 2019 For the fifth year in a row, Umniah has announced its sponsorship of the annual charity food festival organized by the International Community School (ICS) in Jordan last Friday. This annual sponsorship of the festival forms a part of Umniah's strategies and plans that focus to a large extent on activities catering for youth and the youth sector as a whole. Organized by the Parents and Teachers Association of ICS, the food festival welcomed students and their parents to enjoy a wide array of dishes and foods from their various countries, with each dish representing a core component of the culinary heritage of each country over the last 35 years. The funds raised from the festival will be allocated to support the local community and various charities. During the one-day festival, the Umniah team showcased the latest products and services offered by the company for youth and families (Shababi lines 7 and 9, and personal and home subscriptions). As part of its sponsorship, Umniah also led many activities and events on the sidelines of the festival, such as football matches, paper games, basketball and ring-throwing, in addition to hosting a show by the Madaba Latin Monastery. The team also distributed balloons and other gifts to participating children. Commenting on the sponsorship, Umniah’s Marketing Director Zaid Ibrahim said: "Since its inception, Umniah has adopted strategies that focus on delivering a measurable positive impact on the community at large. This is what motivated us to promote the Charity Food Festival organized by ICS for the fifth year in a row, particularly given the theme of celebrating the cultural heritage of various nations that also underpins the forward-thinking event." Ibrahim further noted that the festival is one of the means by which Umniah communicates with its current and potential consumer demographics, offering a good opportunity for the company to directly engage with customers on deeper and more personal levels. END