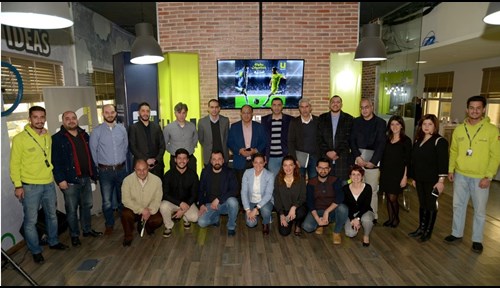 Umniah Organizes Largest Five-a-Side Football Championship Tournament The tournament kicks off in March and will see 256 teams participating over the course of 8 weeks February xx, 2019 – Amman, Jordan: Umniah has launched its annual five-a-side football tournament for amateurs in cooperation with Professional Leaders Company. The competition, which is set to kick off on the first Friday of March and will go on for eight weeks, will take place at the Jordan Youth fields at the Bahrain King Forest - Ghamadan. Umniah's tournament, which will see the participation of 256 teams, is the largest local five-a-side football tournament this year and will have teams compete for the title in games to be held every Friday. Umniah opened up the competition to all amateur players above 16 years of age through the smartphone apps of the Al-Faisaly and Al-Wehdat clubs. After the closing of the application process, which ended on February 26, teams of 5 to 7 players will be formed. Speaking about the tournament, Umniah’s Marketing Director, Zaid Ibrahim said, "Umniah understands the importance of physical activity and healthy pastimes, which is why the company wants to bring Jordanian youth from different governorates under the umbrella of sports to participate in the Kingdom’s most popular game. The competition will promote teamwork, cultural exchange, sportsmanship and physical heath." Ibrahim went on to explain, "Through this tournament, Umniah is striving to expand the involvement of youth in sports by highlighting the abilities of amateur players through this unique opportunity to represent their teams in a competitive arena." Ibrahim also highlighted Umniah’s trailblazing support of sports in Jordan, with a particular focus on football through its sponsorship of the country’s two main clubs, Al-Faisaly and Al-Wehdat. Also commenting on the tournament, General Manager of Professional Leaders Company Shamil Daghestani said, "This tournament supports all of Jordanian society, but focuses particularly on the youth." He affirmed that Professional Leaders Company worked to create a clear set of technical rules and regulations for tournament, as well as a timetable for the games. He went on to add, "The tournament will be subject to international regulations for five-a-side games in terms of rules and public safety. The company has taken all the necessary precautions and steps to manage and organize the games at the highest possible levels, and experienced referees and sports management officials will be taking part. The tournament will take place over the course of eight weeks, with qualifying games, quarterfinals, semifinals and the final game between two teams that beat out the competition. Fans of the game can follow all the scores through the apps of the Al-Faisaly and Al-Wehdat clubs. The semifinals and final games will take place on the same day, and will be followed by the awards ceremony. The winning team will receive a cash prize of JD2500 as well as gold medals, while second place will be awarded JD1000 and silver medals, and the team that places third will receive JD500 and bronze medals. The player scoring the highest number of goals, the best player, and the best goal-keeper will also be recognized with trophies. Umniah is also happy to work alongside the Nestle company, which is showing its support for the competition by distributing free Nescafe cups and mineral water bottles to players, participants, and spectators. The Professional Leaders Company, which was established in 2011 by sports management professionals with international experience in the field, works to encourage athletics among youth in order to develop a sports-oriented generation capable of serving society. The End -