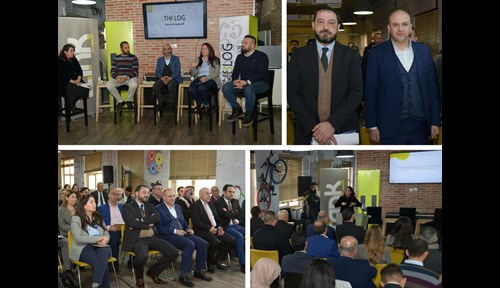 Umniah launches The8log First telecom sector blog in Arabic Shatara: “We strive to provide information in a professional way to empower Jordanian youth and stimulate the minds of those seeking knowledge” Amman, 21 Feb 2019 Under the patronage and presence of the Minister of Information and Communications Technology, H.E. Eng. Muthanna Al Gharaybeh, Umniah launched the “The8log”, the first blog providing diverse content in Arabic, on International Mother Language Day on 21st February 2019. Umniah CEO, Ziad Shatara, launched the first of its kind blog – “The8log” - in the Jordanian telecom sector during the event, which was attended by senior officials from the public and private sectors, as well as students from the faculties of Journalism and IT from various Jordanian universities. The8log was launched under the slogan "Information for You Professionally", to serve as the ideal platform for diverse content in Arabic as well as English. This is hoped to be able to contribute to the preservation of Arab heritage and identity and to enhancing Arab digital cultural and cultural resources by empowering young people and business executives to access instant sources of information, and to contribute to raising their awareness of the technology used by them on a daily basis. His Excellency Eng. Muthanna Al Gharaybeh praised Umniah’s efforts in the field of community development and affirmed that The8log is not only important at the national level but also in the Arab world at large as it enriches Arabic content in cyberspace. This in itself represents a new step of shifting from becoming recipients and consumers to becoming producers and entrepreneurs, especially with regard to the new technological revolution and particularly as Jordan is a pioneer in providing Arabic content on the Internet. Commenting on the initiative, Umniah CEO, Ziad Shatara, said: "We have launched “The8log” to support efforts to reduce the digital literacy gap between developed and developing countries, especially as Arab content accounts for no more than 1% of the languages globally present online.” The development of digital Arabic content brings about great opportunities for millions of users and will lead to a qualitative leap in economic and productive growth, especially in light of the presence of young Arab talent." The event included a panel discussion entitled "The Missing Link between Mother Tongue, Youth and the Digital World", in which speakers presented the most significant challenges facing the spread of Arabic in cyberspace. The workshop was attended by journalist Aroub Sobh; journalist and co-founder of the Hashtag website, Ibrahim Mubaidin, Head of Research and Innovation at “Mawdoo3’” website Tarek Dalbah, as well as writer and graphic designer Mahmoud Malas. The panel discussion was moderated by the President of the Society “Feil Amer” Mrs. Susan Talhouk. A workshop was also organized for a group of young people and university students on the preparation of digital content (blog) presented by the writer and journalist Hussein Nashwan, which dealt with the concept of content and literary arts, writing techniques and skills, in addition to sources of writing and ethics of writing, as well as legal frameworks. The workshop aimed to motivate young people and allow them to share their writings on Umniah’s blog. Shatara added that The8log will enrich this content by offering a variety of themes inspired by reality, which will empower Jordanian youth, stimulate the minds of those seeking knowledge, and enhance Jordan's position as an incubator for human resources and a center for innovation. He also alluded to the difficulties and challenges facing the presentation of unique and comprehensive content such as the choice of subjects and the quality of the content, which is what determines what attracts both Arabs and Jordanians, encourages them to participate and provides specialized and comprehensive information in the mother tongue. He also spoke of the difficulty in motivating and empowering Jordanian entrepreneurs. The8log presents various topics in different subjects such as: travel, health, sports, entrepreneurship, technology and financial solutions, amongst others. You can visit the blog through the following link : https://www.the8log.com/