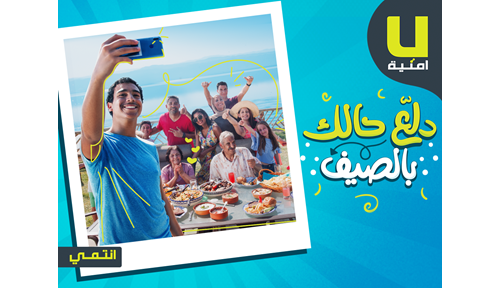 Umniah launches its summer promotional campaign in partnership with ABU and Aziz Maraka Amman July 20: In celebration of summer, Umniah has announced its annual seasonal promotional campaign by launching a new musical song in partnership with popular Arab artists ABU and Aziz Maraka, in addition to introducing a new Spin & Win promotion that will make each subscriber a winner this season. Umniah’s prepaid, postpaid and home and fiber broadband customers are all eligible to participate in the Spin & Win campaign, which will see every dinar spent toward their subscriptions translate to real and valuable winnings through the Spin & Win portal now available exclusively via the Umniah app. Prizes will vary between mobile handsets, free credit, umnicoin, and others, with each participant immediately qualifying to enter the raffle draw for the grand prize of JOD 5,000. “This campaign is a token of our sincere gratitude to the more than 3 million customers who choose our services every single day,” commented Umniah’s CEO, Ziad Shatara. “Given the importance of the summer season to the vast majority of our customers and the increased need they feel to remain connected to their families and loved ones as their movements increase, we sought to launch a campaign to give each and every customer a sense of added value in return for every dinar spent on their subscriptions. This includes a grand prize of JOD 5,000, for which every participant in the campaign will automatically qualify.” Umniah’s summer campaign also includes a series of special activities at City Mall, Galleria Mall and Irbid City Center, where the operator is hosting a number of summer-themed entertainment segments, including VR gaming stations that features the latest titles from 2019. -END-