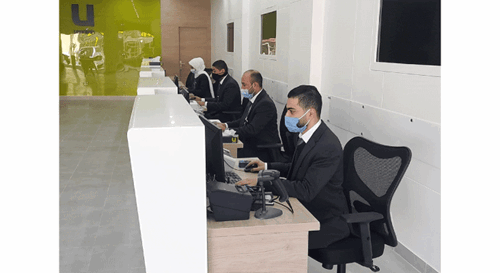 February 7, 2021 – Amman, Jordan: Umniah has announced the opening of two new showrooms, a move that is in line with the company’s expansion strategy and that is a reflection of the increase in demand for its services. The first showroom is centrally situated in Zarqa’s Al-Batrawi area, on Al-Karamah Street, while the second is in Irbid’s Eastern District on Al-Thalatheen Street. The two new showrooms bring the total number of Umniah showrooms to 56 across Jordan.

Created to reflect the company’s modern ethos, the showrooms are characterized by a contemporary design that is in sync with the other Umniah showrooms. Customers receive an electronic service number, which gives them access to an integrated package of Umniah’s latest services and products, including communication solutions, Internet services and high-speed Internet fiber services. Customers can also send their feedback, comments and suggestions electronically through a designated QR code. The showrooms also feature a section that exhibits the latest and most cutting-edge smartphones from numerous vendors, giving customers the opportunity to browse, examine, test and purchase phones, accessories and wearable systems.

Umniah’s Al-Batrawi showroom in Zarqa, which is the largest in the area, also features OSN family entertainment and beIN Sports packages available for customers in the spacious waiting hall, as well as a high-speed Internet fiber testing station.

Speaking about the openings, Umniah CEO Ziad Shatara said that the inauguration of the two showrooms is a move that is directly in line with the company’s expansion and growth strategy, as well as a reflection of its continued commitment to provide services and communications solutions that are of the highest quality and efficiency to all its customers in the Irbid and Zarqa governorates.

Shatara went on to explain that all showroom team members were retained from within the two governorates, which is consistent with the company’s pledge to provide job opportunities to Jordanian youth across the nation. He added that Umniah showroom employees have undergone rigorous training in customer service and are fully knowledgeable about all the company’s offerings.