Umniah, in Cooperation with Tkiyet Um Ali, Sponsors 31 Families Living Below the Poverty Line for a Year 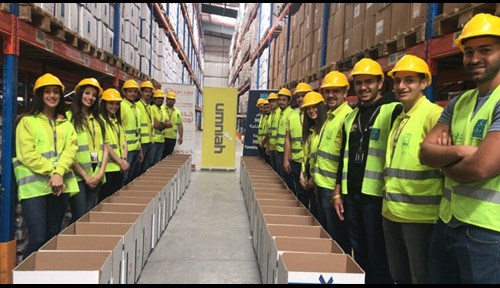 May 21, 2018 – Amman, Jordan: Umniah has expanded the scope of its annual Ramadan campaign, Umniah Al-Khair, to include the support for 31 families living in extreme poverty. The yearly initiative, which embodies the company’s values that are fostered through solidarity and fraternity, also includes charity Iftars and a caravan that distributes relief packages to those less fortunate. Umniah also recently announced it has renewed the cooperation agreement with Tkiyet Um Ali for another year. The Umniah Al-Khair campaign was launched at the start of Ramadan and will continue for an entire year to include 31 families that are living below the poverty line throughout the country’s governorates. The initiative will see that each family will receive a food parcel each month throughout the year. According to the agreement signed between the two entities, the Umniah Al-Khair campaign will include the support by Umniah of Mawaed Al Rahman organized by Tkiyet Um Ali, as well other charity organizations affiliated with Tkiyet Um Ali in Zarqa, Dulail and Russaifeh. At the beginning of the holy month of Ramadan, Umniah team members volunteered their time to pack food parcels at Tkiyet Um Ali’s warehouses, helping distribute them to TUA’s beneficiaries. Umniah’s team also participated in preparing and serving Iftars for those less fortunate through charity organizations affiliated with Tkiyet Um Ali. Speaking at the launch of the initiative, Umniah CEO Ziad Shatara said, "The holy month of Ramadan is the ideal opportunity for us at Umniah to rededicate ourselves to the values of generosity and kinship, two pillars on which our social responsibility strategy is based. We hope to continue playing an effective role in the communities in which we operate throughout the Kingdom through initiatives such as Ramadan’s Umniah Al-Khair.” Shatara went on to add, "This year, and in cooperation with Tkiyet Um Ali, our main partner in this Ramadan campaign, we have expanded the scope of the initiative to ensure that its launch coincided with the beginning of the holy month of Ramadan, and in order to reach as many people across the Kingdom as possible, it will continue for the entire year.” Shatara praised Tkiyet Um Ali’s work to combat poverty in the Kingdom, as well as its pivotal role in attaining social integration through sustainable food support programs to the country’s most needy families. He applauded Umniah’s employees, their efforts and their charitable and humanitarian work as part of this campaign, all which work towards reinforcing the culture of volunteerism at Umniah. Speaking at the launch, Tkiyet Um Ali Director General Samer Balkar said, "We are grateful for Umniah’s support of Tkiyet Um Ali’s various programs throughout the year, as well as its sponsorship of the sustainable food program. Umniah’s backing of 31 families helps guarantee that the Kingdom’s most vulnerable families receive their food requirements for a year, and not just during Ramadan." Balkar went on to say, "We also send our thanks to Umniah for sponsoring our Ramadan Iftars during the holy month at Tkiyet Um Ali's headquarters in Amman." The Umniah Al-Khair campaign, launched by Umniah nine years ago, includes hundreds of charitable and humanitarian activities such as the distribution of Ramadan relief packages, hosting Ramadan iftars, in addition to implementing production-oriented projects for individuals and companies in poverty pockets, thus embodying the concept of sustainability and the creation of sources of income for the beneficiaries. Tkiyet Um Ali currently provides sustainable food support to 30,000 underprivileged families living under the food poverty line in 12 governorates in the Kingdom through monthly food packages, each of which contains 22 food items that meet the family's monthly nutritional needs, throughout the year..