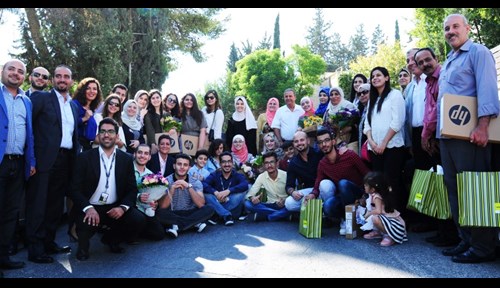 In an effort to honor the Kingdom’s highest achievers in the 2017 the general secondary examination (Tawjihi), Umniah held a special lunch at oriental restaurant Levant for the year’s top ten Tawjihi students. The event included an honoring ceremony, during which the operator’s CEO Ziad Shatara delivered a keynote address congratulating them on their achievements and wishing them continued success in their academic and professional careers. The event was also attended by Umniah’s ambassadors, comedian Rajai Qawas and humanitarian Razan Khilfeh. “This celebration is a gesture of gratitude by Umniah for the unrelenting efforts you have put forth during this critical juncture in your lives,” explained Shatara during his keynote. “You have invested twelve years preparing for your undergraduate education and are about to embark on a new chapter filled with exciting opportunities.” Shatara further lauded the considerable development that the education sector in the Kingdom has witnessed in recent years, which has been a key priority in Jordan’s national reform efforts due to the important role the sector plays in long-term sustainable development. He also underscored Umniah’s unwavering commitment to empower communities through education and to help Jordanians reach their full potential and shape their futures with passion and perseverance. He explored the various initiatives launched by Umniah in recent years with the objective of supporting the education sector, including the initiative to connect 2,652 schools operating under the Ministry of Education to an integrated network that benefits 1.5 million students and around 80,000 teachers. Umniah’s ambassadors also delivered motivational talks to the top performers, offering them anecdotes and tips on how to continue moving forward in their academic and professional journeys. At the conclusion of the event, the students were presented with laptops and free internet subscriptions for a full year, in addition to one-year subscriptions to Shabibi mobile lines. The students also received a variety of giveaways that will prove useful in their university education. END