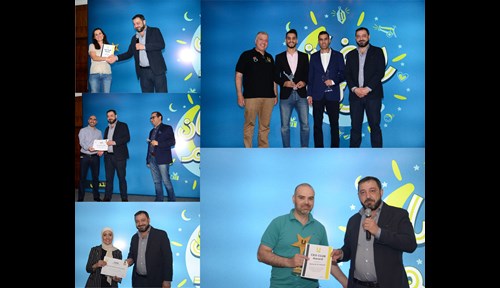 Umniah honors its distinguished staff and Ambassador of Youth and Sports Ahmad Abu Ghosh during its annual iftar Amman, 28 May 2019 Umniah CEO, Ziad Shatara, honored a number of its distinguished employees during the company's annual iftar event at the InterContinental Hotel. During the ceremony, Shatara handed the gold award to Rawa Sawalha and Ahmad Subeihi, and the silver award for Sanad Amin and Faleh Abu Sharefah. The bronze award was received by Mohammad Shahin and Muntaser Rutrout, with the Chief Executive Officer Award being handed to Hamed Al Atiyat and Ledi Lapaj. Shatara also honored Umniah’s Ambassador of Youth and Sports Ahmad Abu Ghosh for winning the silver medal at the World Taekwondo Championship a few days ago in Manchester, and his coach Faris Al Assaf, and celebrated their achievements with Umniah staff. During his speech, Shatara praised the performance of all Umniah employees, especially the distinguished ones, who form the cornerstones of the company's work, development and growth, pointing out that the company has always honored its employees with high performance and excellence in order to enhance the spirit of competition amongst them. Moreover, t Umniah’s CEO also praised the brilliance of Abu Ghosh and his coach Fares Al Assaf in all international sporting events, where he recently won the silver medal in the 24th edition of the World Taekwondo Championships held recently in Manchester. Shatara stressed that the annual iftar celebration ceremony demonstrates the keenness of Umniah to strengthen the ties and closer communication between its employees and thus contribute to increase their affiliation and loyalty to the company and inspire them to double the efforts to achieve their goals in both the medium and long term. -End-