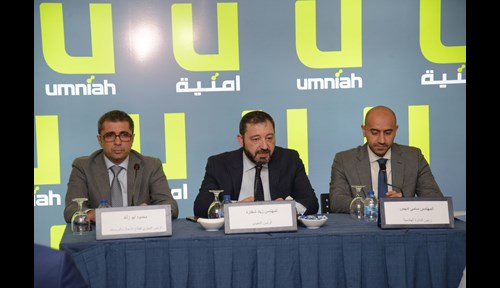 Umniah Expands Fiber Service to Reach 100,000 Homes Shatara: Umniah continues to develop its network by doubling its speed and confirms its readiness to launch Voice over LTE (VoLTE) service for voice and video calling for the first time in Jordan Amman, Jordan, 13 October 2019: Umniah CEO, Ziad Shatara, announced that Umniah has expanded its fiber service to reach 100,000 homes in Amman, at high speeds and competitive prices. Shatara said that the company continues to develop its network in various governorates to cope with the needs of its customers and enrich their experience, as well as enhance the company’s active contribution to digital transformation in the country by providing advanced services and solutions. During a press conference held last Thursday, Shatara announced Umniah’s latest plans and projects, after recently renewing the mobile license for networks operating at 1800MHz with technology neutrality, which was also used to increase the 4G bandwidth to 15MHz. Shatara said the company is ready to launch the Voice over LTE (VoLTE) service over the 4G network soon for the first time in Jordan, and expand its fiber network to cover new areas in Amman. According to Shatara, the renewal of Umniah’s 1800MHz mobile license will allow it to continue providing 2G and 4G network services simultaneously and more efficiently, pointing out that Umniah will continue to support 2G services that some devices still need in order to make calls, in addition to other services. Shatara said that the volume of investments made in these projects reached JD100 million, pointing out that these investments will reflect positively on the national economy, and will benefit both digital transformation and e-government projects. Umniah Director of Engineering, Sami Idbies, said that the new frequency will enhance 4G services by providing additional capacity to accommodate more subscribers at higher speeds. According to Idbies, the new frequency will also support 4G network with additional bandwidth, offering a better-performing network for current subscribers. Idbies stated that adding this kind of added capacity is known as network consolidation, which is recognized by global mobile communication standards, and adds new capacity to the same frequency or other frequency, or expands the current bandwidth Idbies pointed out that increasing the network’s ability allows the possibility of adding new radio sites that improve the coverage of the 4G network. Umniah has added and expanded 50% of its radio sites as part of its network expansion plans in various governorates in 2018 and 2019. Regarding Umniah’s introduction of the VoLTE service, Idbies demonstrated the service live in front of the audience, and explained that this service is in line with the company’s strategy to improve its offerings in Jordan and offer a better customer experience by providing advanced and high-quality services, in addition to its commitment to developing the Jordanian telecommunications sector by investing in the latest technological advancements in this field. Speaking about the benefits of the VoLTE service, Idbies said it will allow customers to make high-definition, high-speed and uninterrupted voice and video calls, as well as browse the internet while making both voice and video calls over the 4G network. Idbies explained that Umniah is ready to provide the VoLTE service in the Jordanian market, and invited mobile phone vendors to update their software in order to be compatible with VoLTE, so that Umniah users can benefit from the VoLTE service as soon as possible. Mahmoud Abu Zannad, Commercial Enterprise & Home Broadband Director at Umniah, spoke during the conference about the launch of Umniah fiber for homes and businesses in Tabarbour area, northeast of Amman. Abu Zannad said that what sets Umniah Fiber apart are its competitive prices and 48-hour installation period. This complements the company’s plans to roll-out a high-quality, efficient fiber service in all areas of Jordan in terms of its prices, technical performance, and the level of service it offers. Abu Zannad explained that Umniah, through its expansion in the areas covered by its fiber service, contributes to providing new opportunities and promising prospects for the business sector, as well as support companies in implementing their business plans and providing new job opportunities. Umniah Fiber is currently available in the following areas: Al Baraka, which is the area located between Sports City circle and Queen Rania Al Abdullah Street, Al Waha circle, Wasfi Al Tal Street, Al Khalidi, and now in Tabarbour, Khalda and Um Al Summaq, in addition to Tlaa Al Ali where it is expected to launch next month. It is worth noting that the Umniah network covers 99.9% of all areas in Jordan. The company has completed two leading projects in Amman in 2018, in cooperation with the Jordan Electric Power Company (JEPCO), by extending a suspended network of over-ground fiber cables on electrical grids. The projects include connecting and automating a number of switching stations, installing smart meters in buildings connected to the telecommunications network, and providing internet services to subscribers in the areas covered by these projects. The positive results of this partnership spurred the launch of a joint venture company, the Jordan Advanced Fiber Company (FiberTech), at a press conference which was held recently, with the aim of servicing other areas in 2019 and the coming years, benefiting both companies and their shareholders, and providing better and more comprehensive services for subscribers. During the press conference, Shatara announced the signing of a partnership agreement with FiberTech, to extend an over-ground fiber network using the electrical grids operated by the Jordan Electric Power Company, in addition to offering fiber services in areas where the Umniah service is available. -End-