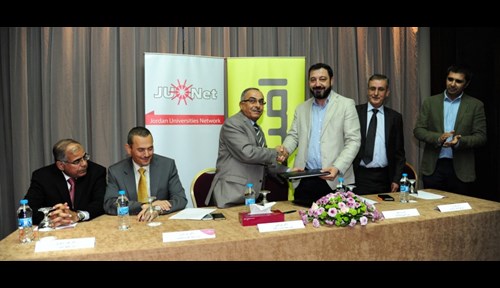 (Amman, September 11 2017) ― Umniah was recently awarded the tender to provide Jordanian universities with internet and MPLS services, which was previously issued by the Jordanian Universities Network (JUNet). An official agreement was signed between Umniah and JUNet to deliver integrated digital solutions to 33 local universities and colleges, spanning internet, networking, MPLS, fixed line and digital security services, which will allow local universities to connect to their headquarters conveniently and securely. The project was completed in less than a month and was yet another step for Umniah to strengthen its partnership with the local education sector, in line with the directives issued by His Majesty King Abdullah II who called for supporting the sector and elevating the level of its services. The Chairman of JUNet Ali Al Qaisi expressed his joy at this partnership with Umniah, noting that the operator enjoys a solid reputation on a regional level due to its longstanding expertise in this arena. He further explained that this tender will help establish a unified network connecting all benefitting universities at speeds reaching 10 Gbps, which will support JUNet’s objectives of elevating the quality of education in the Kingdom and facilitating access to information for both students and staff. The CEO of Umniah Ziad Shatara explained that this tender reinforces Umniah’s strategic partnership with the education sector and demonstrates the operator’s commitment to this vital sector. “Through this tender, Umniah will leverage on MPLS technology to connect benefitting universities and colleges in order to facilitate the exchange of information and allow for the use of numerous applications, including video conferences, VoIP, and others,” added Shatara, noting that what differentiates internet and MPLS services offered by Umniah is their unparalleled value proposition, offering superior connectivity speeds at significantly reduced costs, in addition to delivering a considerably improved user experience and a wealth of virtual private networks of various sizes. This is not the first time that the education sector selected Umniah to provide digital communication services. Last year, the operator won a tender to connect schools and agencies operating under the Ministry of Education, for which the operator established the necessary infrastructure to connect 2652 schools nationwide. The operator also established a dedicated intranet for use by the benefitting schools and agencies and increased the speed of the network to provide teachers and staff with easy access to high speed communication services that facilitate decision-making. It is worth noting that JUNet is a non-profit corporation owned by universities of Jordan and operates to connect universities as part of a high-speed network that delivers cutting edge communication services necessary for higher education and scientific research. The signing of the agreement was attended by the President of the Jordan University of Science and Technology Omar Al-Jarrah, the President of Yarmouk Univeristy Rifaat Faouri, the President of World Islamic Sciences and Education University Salman Albdour, and the Vice President of Al Balqa Applied Univesrity Jamal Al-Nsour, in addition to the heads of IT departments at local universities. END