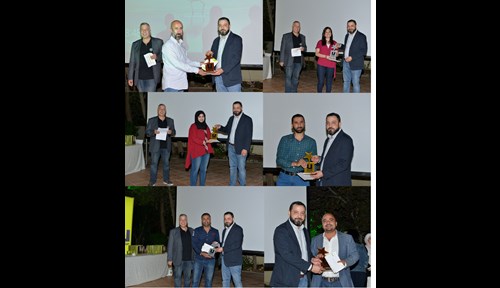 Umniah Honors Outstanding Employees at Annual Iftar June 13, 2018 – Amman, Jordan: Umniah held its annual iftar at the Marriott Hotel, during which CEO Ziad Shatara honored a number of the company's outstanding employees. The event, which was attended by members of the executive committee, is organized annually as an expression of appreciation for its employees, showcasing their hard work and efforts At the event, Nizar Khalil, Majed Al-Baqur, and Farouq Hassan were presented with the Chief Executive Officer's award, while certificates of appreciation were distributed to a number of outstanding employees by Shatara. Abdullah Al-Sha'ir was honored for the positive role he plays in the customer care department, while Alaa' Ghubun was recognized for her innovative solutions in large projects. Maha Su'aydan won an award for her role in automating credit cards and upgrading the conflict resolution process, and Khalid Hujjuj was recognized for his role in upgrading Umniah branches in accordance with the company's diversification strategy. Eyhab Al-Qasir received a certificate for his role in the establishment of the Youth Department and its transition into a revenue-generating unit, while Faisal Mustafa received a certificate for working to automate distribution operations and assisting other departments in their projects. The last two awards were given to Maher Abu Shu'aib, who worked on developing services and products, and Nasser Issa for his efforts to maintain Umniah’s status on the Custom Department’s Golden List. Shatara spoke of his appreciation and pride in Umniah’s team, who have each contributed to maintaining the company’s reputation for excellence and have placed it at the forefront of the country’s communications sector. He went on to add that the annual iftar held for all the company’s employees reinforces the spirit of healthy competition, spurring team members to continuously exceed expectations, to their benefit and that of the company. In his remarks at the iftar, Shatara said, "We are proud of this outstanding group of employees, and the company is committed to providing an appropriate environment that supports and nurtures them. Each team member plays a vital role in the company, allowing Umniah to provide the best technological solutions in the local communications market, characterized by impeccable customer care and efficient and reliable services." Shatara also stressed Umniah's continued eagerness to communicate openly with its staff at every opportunity, extending and facilitating the bridges of dialogue with them, which will contribute to increasing their feelings of belonging within the company and work to enhance cohesion within the organization. - END -