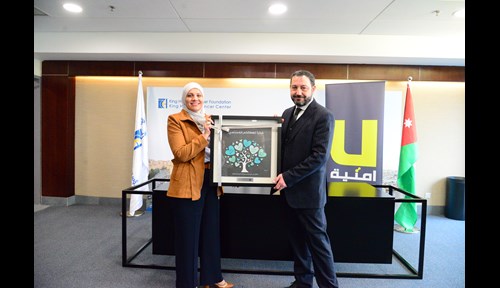 Umniah customers donate more than 13 thousand Jordanian Dinars to the King Hussein Cancer Foundation Amman, February 19, 2019 More than 13 thousand Jordanian Dinars have been donated by Umniah customers during the past year through the implementation of its “umnicoin” loyalty program. Through “umnicoin”, Umniah provides its customers with the option of collecting umnicoin and replacing them with various rewards or donating their value to the King Hussein Cancer Foundation or other national institutions with charitable goals as per the customer’s wish. As part of its corporate social responsibility of supporting various national institutions with humanitarian objectives, Umniah recently launched several campaigns that thousands of customers partook in, especially during Ramadan, Eid Al Adha, Breast Cancer and Prostate Awareness Months. Umniah initiated the payment of one Jordanian Dinar for every dinar donated by the client through umnicoin to the King Hussein Cancer Foundation, reasserting their continued support to the Foundation in its efforts to combat cancer. Umniah CEO Ziad Shatara expressed his pride in the results of these campaigns, stating: "We are very proud of our customers who have shown a great response to contributing to the donation campaigns of the King Hussein Cancer Foundation, and this is indicative of the generosity and goodness of Jordanians. We have therefore initiated a donation of one dinar for every dinar donated through umnicoin during special occasions such as Ramadan and Breast Cancer Awareness Month, to encourage customers to donate.” He further pointed out that these events promote positive values in society, especially those related to solidarity and cohesion. Shatara praised the efforts of the King Hussein Cancer Foundation and Centre to combat cancer in Jordan and the Middle East region. He expressed his hope that other companies will follow Umniah's example and strengthen their humanitarian initiatives by supporting charitable organizations and institutions aimed at empowering vulnerable segments of society and disadvantaged families. Umniah has launched umnicoin in March of last year as part of its plans to provide the best digital services and solutions to its customers. The application allows all postpaid and prepaid customers to subscribe to any service, collect umnicoin and then replace them with products or services, or to donate them to Tkiyet Um Ali, the King Hussein Cancer Foundation, Al-Aman Fund for the Future of Orphans or the “Tahseen” Initiative.