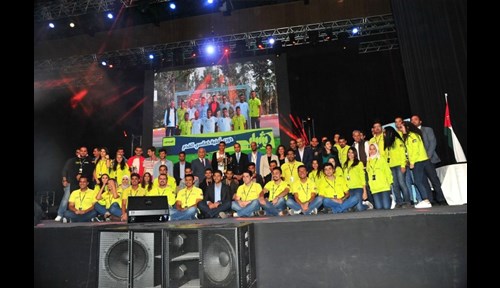 Presents Winners with Rewards and Gifts November 13, 2017 – Amman, Jordan: Umniah concluded its highly popular interactive Shababi campaign, which saw the involvement of students from 13 Jordanian universities and included a five-a-side league football championship held on a mobile football pitch that was constructed especially for the campaign. At the closing ceremony held at the Al-Ahliyah Amman University’s Arena Theatre Arena Theatre, Umniah Marketing Director, Zaid Ibrahim handed out prizes, rewards and gifts to the winning teams, and awarded medals to the winners of the football tournament. First place was won by the team representing Tafilah University, second place went to Al-Ahliyah Amman University, and third place was a tie, won by the University of Jordan and the German Jordanian University. The closing ceremony, which was attended by tournament players and university students, also saw the participation of university deans and staff members, as well as Umniah team members. Hosting the event was Jordanian artist Najm Salman, and Umniah Youth Leader Ehab Kassir presented awards and trophies to the leading youth work teams. Umniah launched its Shababi campaign in mid-October in cooperation with Huawei through Al-Shuruq, its dealer in Amman. In its third consecutive year, the campaign introduces Umniah products and services to the youth. Huawei, Umniah's partner in this campaign, through its dealer Al-Shuruq, provides prizes to students who participate in Shababi packages that include one Shababi 5 line and a Huawei phone. Students also have the opportunity to participate in a draw to win 10 $1000 scholarships. Commenting on the campaign, Umniah CEO Ziad Shatara said, "The youth represents the largest category within the Umniah subscribers' base, and hence, the provision of an integrated package of communications and internet services represents a major effort by us at Umniah, to service this category." Shatara went on to add, "Our aim with this campaign was to be different and innovative, two goals that we were able to achieve through the variety of gifts and prizes as well as the activities that took place during the month-long promotion." He explained that as always, Umniah always adopts excellence in all its services and integrated communications solutions. Shatara noted the importance of the youth category, and said that Umniah adapts its services and products to take into account this very important segment of the population. During the campaign, which reached more than one quarter of a million students, Umniah's team introduced the Shababi platform and its accompanying line, which provides communications and Internet services at competitive prices for the youth. Students also had the chance to learn more about the communications services and marketing offers provided by Umniah.