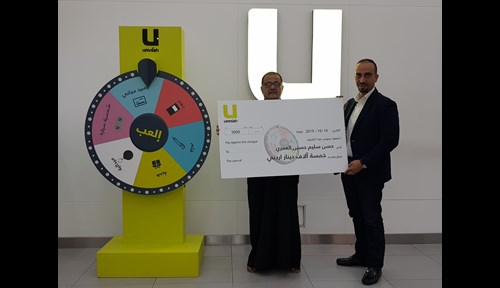 Umniah Concludes 2019 Summer Campaign and Announces Winner of Grand Prize Amman, Jordan, 21 October 2019: Umniah has announced the winner of its grand prize as part of its Summer Campaign 2019 which ran from 18 July until 30 September. Khaldoun Sweidan, Consumer Mobile Director at Umniah, presented the grand prize of 5,000 Jordanian dinars to Hassan Salim Hussein Omari, during a ceremony held at the company’s headquarters in the presence of senior officials. The Summer Campaign saw prepaid, postpaid, home internet and fiber subscribers receive many prizes for every Jordanian dinar they spent on recharging their lines or paying their monthly subscriptions. The prizes included mobile phones, free credit balance, umnicoin points, Wavo subscriptions, as well as the chance to automatically enter the grand prize draw of 5,000 Jordanian dinars. Commenting on the campaign, Sweidan said: “The campaign is a modest attempt by Umniah to express our gratitude and appreciation to our customers for their trust in our services.” Sweidan pointed out that the high level of participation reflected customers’ satisfaction with this campaign. Moreover, Sweidan stressed that Umniah is keen to provide the best telecommunications and internet services and solutions to its customers, who are one of the most important pillars for the company’s work, development and progress, in its efforts to maintain the leadership it has worked to build and promote since its establishment in the Jordanian telecommunications market, pointing out that the company always seeks to improve the quality of its services to meet the aspirations and desires of its customers. Umniah held its Summer Campaign 2019 at City Mall, Galleria Mall and Irbid City Center, which boasted a variety of entertainment and fun activities including virtual reality (VR) games, exciting adventures, and other fun-filled summer activities. -End-