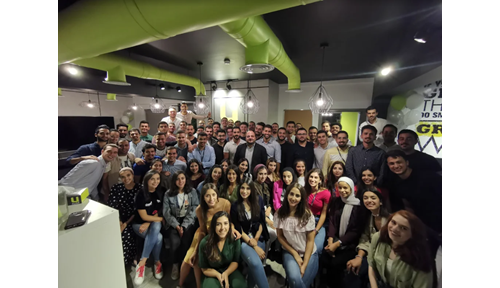 Umniah Celebrates Youth Unit’s 5th Anniversary with New Location Amman, Jordan, 7 October 2019: In line with its mission to support youth and the role they play in driving change for Jordan, Umniah has celebrated the 5th anniversary of its flagship Youth Unit with a new location in Shmeisani. The location was revealed during a grand opening ceremony attended by Umniah’s CEO, Ziad Shatara, as well as members of the Youth Unit and senior managers and employees from Umniah. The new location will provide the perfect environment for members of the Umniah Youth Unit to learn and grow and develop their abilities and skills to enter the job market. Umniah’s CEO, Ziad Shatara, confirmed during his speech at the opening ceremony that the new location is a reflection of Umniah’s corporate identity which associates itself with the youth segment, stressing the fact that Umniah has always been keen to implement the directions of His Majesty King Abdullah II to support youth in their journey towards creating change and development for their country. Since the beginning, Umniah has worked hard to empower young people in Jordan and provide them with the tools and skills they need to build a better future as effective members of their society. “Established in 2014, Umniah Youth Unit was a way for the company to extend its support to youth in Jordan and provide them with the necessary skills and training they need to enter the job market and drive the future of their country,” Shatara noted. “Umniah, through its Youth Unit, believes in the importance of empowering young people, and has worked tirelessly to provide university students in Jordan, both men and women, with the opportunity to join the Youth Unit and learn a myriad of skills for their future, from communication and negotiation to direct marketing skills. Members of Umniah Youth Unit can take part in various internal training programs offered by Umniah within its business units and departments, and can also give back to their community by participating in Umniah’s volunteering and CSR activities,” Shatara added. “The Youth Unit is a direct extension of Umniah, and has now become a part of the company’s events and activities held throughout Jordan. Since its establishment five years ago, more than 300 students have joined Umniah Youth Unit from Jordan’s public and private universities, and more than 200 of them have graduated and are now working with top companies in Jordan and abroad, or have joined Umniah as employees,” Shatara concluded. -End-