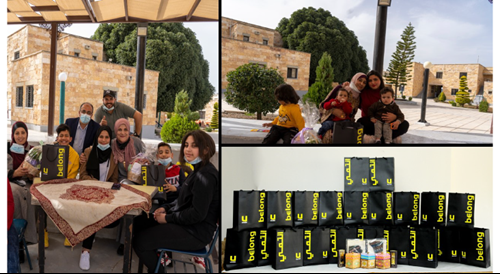 March 22, 2021 – Amman, Jordan: In a move that is directly in line with its corporate social responsibility (CSR) strategy, Umniah took part in three Mother’s Day celebrations at SOS Children’s Villages across Jordan, in Amman, Irbid and Aqaba. Umniah also launched a donation campaign through its umnicoin loyalty program to coincide with the celebrations, which will see the company match every JD1 donated to SOS Children’s Villages between March 15 and March 31, 2021 as a way of encouraging more people to support the organization.

The celebrations and the donation campaign are just some of the ways that Umniah shows its unwavering support for the efforts of all Jordanian mothers, and especially those working at SOS Children’s Villages, who have had a pivotal role in raising and caring for orphaned children and those who have lost family support.

Umniah CEO Ziad Shatara spoke of the efforts by the company to support national humanitarian and social institutions that support and empower Jordanian mothers, adding that the SOS Children’s Villages Jordan donation campaign stems from the company's firm belief in the mission of the organization, adding, “Today, with this donation campaign through the umnicoin loyalty program, we give all Umniah customers the chance to further the cause of this noble institution, and we pledge to match each dinar donated with one of our own." Shatara also stressed the fact that the pillars of Umniah’s corporate responsibility strategy include the support and empowerment of Jordanian society, and celebrating the country’s mothers is just one way of showing appreciation for their consistent love to their families and their communities.

SOS Children’s Villages Jordan National Director Rana Al-Zoubi praised Umniah’s ongoing support to the association, adding that initiatives like the ones launched on Mother’s Day are a true reflection of the company’s commitment to the communities in which it operates. According to Al-Zoubi, through active support from companies like Umniah, the country is better equipped to achieve sustainable and comprehensive development. She went on to stress the importance of Umniah’s latest initiative, which helps organizations that look after orphaned children and those who have lost family support further their mission of helping them become active members of their communities.

During the celebrations at the SOS Children's Villages in Amman, Irbid and Aqaba, gifts were distributed to the mothers and aunts working throughout the organization, while the children were offered sweets that were bought through the Princess Taghreed Foundation for Development and Training, a move that benefited two national institutions that work with local communities. The Princess Taghreed Foundation provides care for orphaned girls after the age of eighteen, helping them integrate into the local community and secure a dignified future.

SOS Children’s Villages Jordan is a national not-for-profit society that was established in Jordan in 1983, providing family care services, food security, shelter, education, health and mental care, as well as economic empowerment, protection and social integration in line with the guidelines for the alternative care of children.