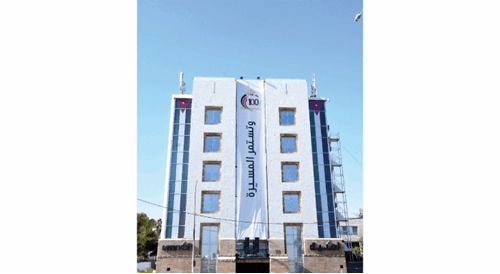 January 28, 2021 – Amman, Jordan: In celebration of Jordan’s centennial (1921-2021), Umniah decorated its headquarters in Shmeisani as a way to mark the historic occasion and congratulate His Majesty King Abdullah II and the Jordanian people. Earlier, Umniah changed the name of its network to 100JO as another way to mark this important event, which is treasured by all Jordanians.

Speaking about the centennial, Umniah CEO Ziad Shatara spoke of the numerous achievements by the company and its entire team under the wise stewardship of the Hashemites of Al Bait over the past 100 years, as well as the notable advancements that Jordan has made.

Shatara went on to add that the Jordanian telecommunications and information technology sector, which was launched in 1921 with the establishment of the Emirate of Transjordan through the formation of the Post and Telegraph Department, has distinguished itself with a series of clear and distinguishing advancements that are recognized both in the Arab world and on a global scale.