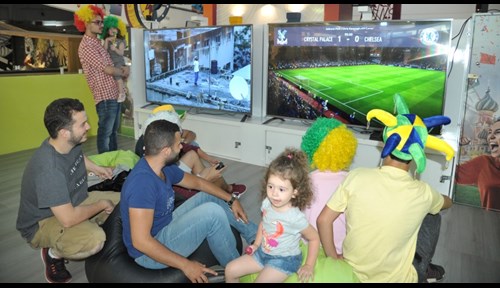 June 23, 2018 – Amman, Jordan: As part of its strategy to present its customers with all the latest global happenings, Umniah launched a World Cup-specific promotion and entertainment campaign, the most popular sports event in the world. Umniah introduced its latest World Cup offerings at a number of malls, restaurants, and cafes in the cities of Amman, Zarqa and Irbid, including line subscription offers, the Umnicoin rewards program, beIN channel subscriptions as well as WAVO and Internet packages. The campaign, which will run through the middle of August and is based on a World Cup theme, will include a number of virtual reality games, some connected to the recently launched Umnicoin rewards program and the Captain Penalty Shootout. Umniah customers will have the chance to try and score goals in an enhanced reality setting, or alternatively act as the goalkeeper and try to block shots. Both new and existing Umniah customers will have the chance to receive a free one-month subscription to beIN’s sports channels when they sign up for a one-year Internet subscription, which is perfect for World Cup football fans. Commenting on the World Cup campaign, Umniah CEO Ziad Shatara said, "This distinct promotion campaign upholds two of the company’s key pillars: the customer always ranks at the top of our priority list and our strong support of sports, athletes and athletics." He added that the World Cup competition is considered the most prominent sports event at a global level, boasting millions of followers, fans and viewers. Therefore, Umniah is unwavering in its mission to continuously offer the latest and most cutting-edge communications and service solutions to its customers in the local market. Shatara went on to add, "Through this outstanding campaign, Umniah team members will interact with avid sports fans through virtual reality games in a spirit of friendly competition and enthusiasm." He noted that a youth team will be available at a number of malls, cafes and restaurants throughout the cities of Amman, Irbid and Zarqa for the duration of the campaign, offering exceptional prizes to participants that include a free subscription to beIN’s sports channels for an entire month.