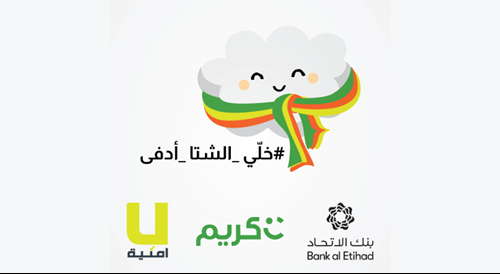 December 20, 2020 – Amman, Jordan: Umniah, Bank Al-Etihad, and Careem, three of Jordan’s leading companies that each share similar humanitarian and community values, have launched the “Let this Winter Be Warmer” campaign with the onset of the winter season. The campaign, which aims to purchase packages containing basic living necessities for the season to be distributed to low income families in remote areas, was held in cooperation with the Crown Prince Foundation’s Naua initiative and the Jordan Hashemite Charity Organization.

In addition to purchasing a big number of packages by the three companies, they also partnered up to create various methods for donation, a move that will allow them to reach out to more families in need through the participation of the largest number of donors to the campaign.

The donations’ campaign will last till December 31st 2020, and each package will contain two blankets and kerosene voucher with a total value of JD35 per package, To simplify the mechanism for donations by individuals, the companies have provided the option for contributions through their apps, a move that will allow them to offer aid to the largest possible number of families in need, helping them alleviate the challenges that many Jordanians face during the cold winter months.

The partnership is directly in line with the corporate social responsibility strategy of all three companies, who diligently work to make a positive impact on their communities through effective partnerships and initiatives. Furthermore, such enterprises strengthen the spirit of cooperation and giving in Jordanian communities, which is in line with the UN’s Sustainable Development Goal 17 that advocates global partnerships to implement and achieve goals.