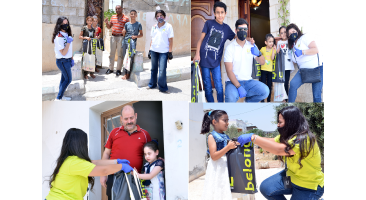 August 4, 2020 – Amman, Jordan: In line with its volunteer program and under the umbrella of “Umniah Al Khair” initiative, Umniah joined forces with the National Committee for Demining and Rehabilitation (NCDR) to distribute Eid al Adha gifts to children registered in the committee’s National Victims Record. The event, which was dubbed the ‘Be Happy with Them’ initiative, was held as part of the company’s continuous efforts to effectively partner with the communities in which it operates.

Since its establishment, Umniah has played an active and innovative role in Jordanian society as part of its corporate social responsibility strategy, as a way of showing the company’s appreciation for the continued trust placed in it by the country and its people, as well as a way to effect positive change, to assist those less fortunate and to bring about sustainable development.

The company also pays particular focus on the country’s youth, promoting the ideals of entrepreneurship and innovation through ongoing learning programs and seminars in order to encourage them to be productive members of their communities. Recently, Umniah was one of the first companies to register for the national “Nahno” youth volunteering campaign, an initiative by the Crown Prince Foundation’s Naua platform. The campaign, which was launched in cooperation with the United Nation’s Children Fund (UNICEF) and the Ministry of Youth, aims to lay the foundations for a national volunteering culture that works to bring about positive changes in society.

Speaking about Umniah’s Eid al Adha campaign, Chairman of the Board of Directors of the National Committee for Demining and Rehabilitation (NCDR) His Royal Highness Prince Mired Bin Raad praised the company’s spirit of volunteerism as well as this latest initiative, which brought joy to the children and their families during the holy celebrations. The prince went on to express his appreciation for the vital role played by private sector institutions in supporting Jordan’s diverse local communities.

At the launch of the initiative, Umniah CEO Ziad Shatara underscored Umniah’s enduring commitment to the implementation of its corporate social responsibility strategy, which works to support numerous humanitarian programs, initiatives and aid organizations while simultaneously shedding light on the positive impact that these initiatives have within their communities. Shatara went on to express his deep gratitude for both the initiative, as well as for the humanitarianism displayed by company’s employees, who have consistently shown their commitment to their country through numerous endeavors that have had profound and positive effects.

Shatara went on to commend the efforts of the National Committee for Demining and Rehabilitation, which works tirelessly to ensure that the Kingdom is free of mines and explosives, rehabilitates victims of mines, and implements awareness programs in affected areas in order to decrease the number of injuries. He also thanked UNICEF for its role in the initiative and for its generous donations of music albums and gifts to the children.

The National Committee for Demining and Rehabilitation was established by royal decree in 2000, and is headed by HRH Prince Mired Bin Raad Zeid Al Hussein, and counts both public and private entitles as members since 2004. The committee’s objective is to clear Jordan of mines and all remnants of war, reduce their impact and adapt its various programs in line with the developmental, social, humanitarian and economic programs in the country in order to rehabilitate victims and help them integrate seamlessly into society.