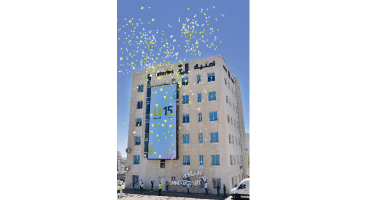 June 27, 2020 – Amman, Jordan: On June 25, 2020, Umniah held a virtual celebration to mark the 15th anniversary of its launch in the Jordanian telecommunications market. The celebration, which saw balloons released outside the company’s Shmeisani headquarters, was attended by Umniah CEO Ziad Shatara and members of the company’s executive management team and staff. During the celebration, awards were distributed to distinguished staff members, and eleven exceptional employees were recognized for their efforts and years of service with honorary awards. In his speech marking the event, Shatara lauded the efforts of all Umniah’s employees, which over the years have resulted in the achievement of a number of notable firsts in the Jordanian telecommunications market, as well as the loyalty and confidence of three million subscribers. Shatara went on to say that operating in a market as competitive as Jordan’s requires consistent and exceptional efforts from the entire team, who can turn challenges into opportunities. The energy and perseverance shown by Umniah’s team over the past 15 years are points of pride for the company, shining a light on their many accomplishments. He noted that Umniah’s transformation in the Jordanian market is marked by a number of firsts, including being the first company to offer exceptional services at the lowest prices, the first telecommunications company to supply wireless broadband internet, and the first telecommunications company in Jordan to be recognized with the ISO certification for customer satisfaction and product quality, to name just a few. Shatara affirmed that Umniah’s achievements would not have been possible were it not for the entire team’s efforts to provide the best products and services to both its corporate as well as its individual clients. Shatara also spoke of the transformations that the entire world has recently witnessed as a result of the coronavirus pandemic, which has necessitated a noticeable shift towards digitization and electronic transformation. According to Shatara at the end of his speech, “Umniah’s 15-year march in the Jordanian telecommunications market continues, and will continue to shine, thanks to its men and women who are the foundation of the company. Together, we will continue to offer the excellence in service that we have become known for in the Jordanian communications market.” To commemorate the occasion, Shatara announced that on June 26 and 27, Umniah will present its customers with a gift of free 15 GB for five days. - End-