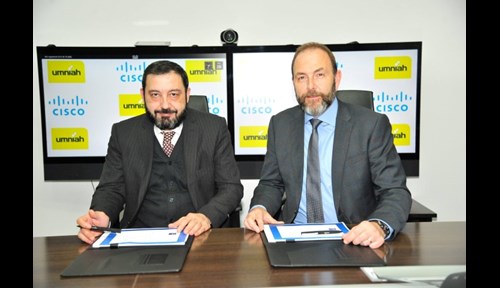 Amman, December 3, 2017 Umniah was recently awarded the Cloud and Managed Services Program (CMSP) certification from global network solutions provider Cisco after completing an extensive and rigorous auditing process, which showed that Umniah’s network operates under the highest global standards. The CMSP certificate by Cisco is considered the gold standard for measuring the network quality of telecom operators and business solution providers. Regionally, only a handful of trusted Cisco partners have received the certificate, with Umniah being the first in the Kingdom to meet the lofty standards and receiving the “Master” rating. The award was presented to Umniah’s CEO Ziad Shatara by Cisco’s Vice President for Middle East and Africa operations, David Meads and the company’s General Manager of the Levant Region, Hani Raad. Shatara expressed Umniah’s great pride at receiving this prestigious certification, noting that Umniah considers its partnership with Cisco a great privilege that reflects the company’s commitment to excellence. It is worth noting that Umniah had signed a strategic partnership agreement with Cisco in 2014, which offered Umniah a series of privileges that include a variety of cutting-edge networking and communication solutions, as well as the right to use Cisco’s brand name in the promotional material associated with Umniah’s managed and internet services. The CMSP certification is also a clear indication that Umniah has the capacity and expertise necessary to provide world-class cloud computing and managed services. As Shatara notes, it is the ideal method for gaining the trust of customers and demonstrating a company’s commitment to provide integrated services that can easily adapt the growing needs of its clients. “We are tremendously proud of our partnership with Umniah, who has consistently demonstrated its ability to offer cutting-edge cloud computing and managed services to the Jordanian market,” commented Cisco’s General Manager of the Levant Region, Hani Raad, emphasizing the Umniah was the first to meet the high standards required to receive this prestigious certification. END