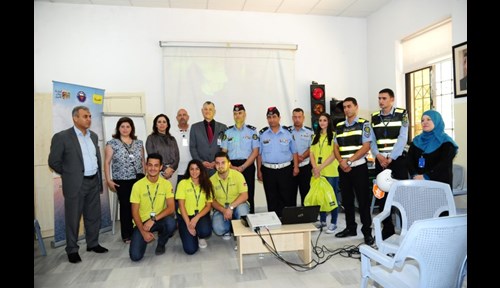 AMMAN, xxx August 2017 The Jordan Traffic Institute recently partnered with Umniah and the Greater Amman Municipality to implement an awareness campaign for school students and drivers, under the heading of “Protecting Children is Our Shared Responsibility.” The campaign, which concluded on August 9th, is designed to raise traffic awareness amongst students and developing their ability to protect themselves from traffic accidents, in addition to providing them with various relevant theoretical and practical skills. During the campaign, Umniah participated by sending short awareness text messages to its subscribers. “Umniah’s participation in this campaign stems from its ongoing efforts to support initiatives that deliver measurable value to local communities,” commented Umniah’s ‎Director of Communications, Wajeeha Al Husseini. Husseini noted that this campaign is a crucial step in instilling positive behaviors amongst school students in the arena of traffic safety, as it provides a wide array of essential information and skills that can have a lasting impact on how students interact with various traffic elements. The campaign included lectures held at various public parks, delivered by specialists from the Jordan Traffic Institute. The lectures covered best practices and practical implementations on general conduct in public parks, concluding with the dissemination of informative brochures and posters to participants as well as various gifts as a gesture of appreciation for their efforts. Campaign participants included students of schools operating under the Ministry of Education as well as students from various summer camps, in addition to representatives from civil society organizations, and employees of the Greater Amman Municipality, the Jordan Traffic Institute, The King Hussein Park, and Umniah. END