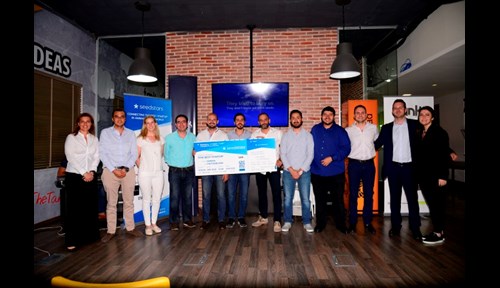 July 25, 2018 – Amman, Jordan: The Tank, Umniah's entrepreneurship and innovation incubator has announced the names of the three winning Jordanian startups of the Seedstars Amman competition. The competition, which was held at The Tank’s headquarters in Amman between July 17 and July 19, saw the top position go to Robu, a financial decision-making platform created especially for executive managers who want a better handle on cash flows and performance. In second place was Instructit, a cloud-based platform that permits allows people to establish their own online academy. Third place was awarded to Sadeed, which specializes in automating customer service through social media. Robu’s top position in the competition allows it to move on to Seedstars World, and brings with it the chance to be mentored by the best in the business and networking opportunities, in addition to participating in the Seedstars World summit in Switzerland, and the chance to win $1 million in investment money. As the platinum sponsor of the event, Umniah offered participating companies the opportunity to join the second round of The Tank’s program, inviting them to register through the link www.umniah.com/en/the-tank. The Tank was also the venue for two intensive guidance sessions during the competitions, with 10 startups presenting their work during the first session, including Robu, Instructit, Sadeed, Friendture, Elevatus, Tarteeb, Ranneh, BeMotion, Faylsof and ArabiaClouds. The second session saw the final three startups presenting their projects, and getting a better understanding of what investors are looking for in a startup company. Umniah Director of Communications Wajeeha Al-Husseini spoke of her pleasure at seeing three Jordanian startups winning Amman Seedstars. She also highlighted the high demand for competitions such as Seedstars, where startups can present their pioneering ideas in an innovative and productive atmosphere such as that provided by The Tank. For the past four years, The Tank has provided financing, training and consulting services to more than 5,500 male and female entrepreneurs in order to help them expand and upgrade their projects, turning them into viable and income-generating companies. The incubator has also worked to provide networking opportunities for startups and entrepreneurs, who have furthered their business opportunities by participating in international conferences.