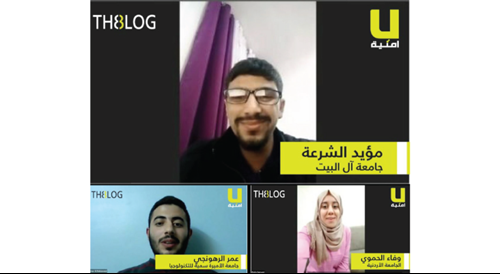 December 19, 2020 – Amman, Jordan: As part of its celebrations to mark UN Arabic Language Day, which is observed on December 18, 2020, Umniah’s blog, The 8Log, announced the names of the three winners of its writing competition for university students, on Thursday, December 17, 2020, in a virtual ceremony that was streamed live on Umniah’s Facebook page.

After the final round of judging by the panel of experts, as well as voting by the public on Umniah’s social media platforms, the student Mouayad Al Shraa from Al AlBayt University won the first prize for his article entitled “Sufism and its Manifestations on Arabic Narrative Text,” while second place went to Omar Rahonji from Princess Sumaya University for Technology for his article “Phones with Foldable Screens – A Promising Future or A Failure?,” and third place went to Wafa Al Hamawi from Jordan University, for her article entitled “Children With Learning Disabilities.”

The competition was created to encourage and inspire students to revive and expand their use of the Arabic language, as well as enrich the availability of Arabic content online. This year, 129 students from 16 Jordanian universities participated, with seven finalists participating in an Arabic writing seminar on the principles of business and content writing held by Anwan, a startup with Umniah’s incubator, The Tank.

The panel of distinguished judges, which included Hashtag Arabi Editor in Chief Ibrahim Khraisat, Edraak Course Manager Nisreen Rawashdeh, Crown Prince Foundation Director Nujoud Serhan and Umniah Corporate Communications Supervisor Batoul Arnaout, chose five articles for the competition’s final stages. The five articles that went on to the final round included one by Razan Da’aseen from the Al-Hussein Bin Talal University entitled “Coronavirus and the Mental Anxiety of High School Students,” as well as “The Impact of Sports on Mental Wellbeing” by Ruba Al-Shawawrah from the World Islamic Sciences and Education University.

Umniah CEO Ziad Shatara congratulated the winners of The 8Log writing competition for university students, adding that the event has gained wide-spread popularity since its launch, and has witnessed impressive submissions that show a high level of creativity and distinction in their use of language. In his remarks, Shatara said that The 8Log, which was launched in February 2019, will continue to pursue its mission of presenting specialized content in Arabic in a bid to enrich its availability on the web, offering information on a variety of subjects, shedding light on innovative Jordanian initiatives and success stories that stand out in the world of entrepreneurship, as well as contributing to the establishment of a community of writers, readers and thinkers.