Speedtest by Ookla Recognizes Umniah as the Fastest Network in Jordan 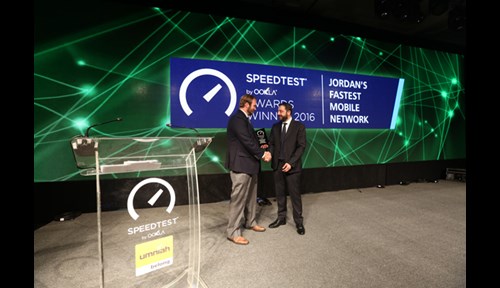 The recognition came from no other than Speedtest by Ookla, the global leader in internet testing and metrics. Using data from consumer-initiated tests, Ookla identifies the best internet services in countries around the world. To determine the fastest networks, Ookla analyzes the fastest technology available in each country, including mobile devices, and ranks the country’s networks by average download speed. After six months of consumer-initiated testing in Jordan, the Ookla results came in, naming Umniah as number one and presenting the company with the fastest network in Jordan award. At a press conference to announce the award, Umniah’s CEO Ziad Shatara said that the recognition is a testament to Umniah’s growing international reputation. He emphasized the company’s continued effort to provide cutting-edge telecom services (especially broadband) to individuals, businesses and homes across the Kingdom. Eric Emerson, Speedtest by Ookla representative, said at the press conference that the company rigorously analyzed consumer-initiated speedtests taken on Umniah’s 3G and 4G networks in addition to other operators’ networks to determine the award. Consumers ran these tests in 19 cities across the Kingdom over the course of six months, and the result is further proof that Umniah’s network speeds not only surpass the local competition, but also raise the company’s performance to international standards. Shatara added that Umniah’s vision was based on changing the telecommunication ecosystem while simultaneously doubling the number of internet users and spreading the use of these digital services across the Kingdom. Since its inception in 2005, Umniah has helped break down the digital divide by bringing high-speed networks to previously unconnected parts of the Kingdom. Last year, Umniah invested $300 million to create new 3G and 4G LTE networks, as well as Broadband Fixed LTE. These investments, which are expected to reach $500 million by the end of 2017, have qualified the company to win a number of public sector tenders. The Ministry of Education (MoE) recently awarded Umniah with a tender to connect 2650 of the country’s schools and 43 MoE directorates with its premises through a unified network. Despite being the third and newest service provider in Jordan, Shatara added that the company has managed to provide its customers with the best services and the best prices without jeopardizing quality (real value for money). Umniah is committed to the public-private effort of transforming Jordan into an ICT hub in the region, bringing high speed internet to different sectors, including education, finance, transportation, health, and more. Internet speed is the primary gauge for the success of any telecom or broadband provider. From the everyday mobile users to corporations that rely on broadband, Shatara stressed that telecom operators shoulder a growing responsibility to provide high-quality, high-speed internet services that meet the needs of every sector of society. It is worth mentioning that Speedtest.net is a web service that provides free analysis of Internet access performance metrics, such as connection data rate and latency. It was founded by Ookla in 2006, and is based in Seattle, Washington. Ookla is considered a leading, reliable, and nonpartisan company that analyzes and ranks internet speeds globally (www.speedtest.net/awards). The service measures the bandwidth (speed) and latency of a visitor's Internet connection against one of 4,759 geographically dispersed servers (as of August 2016) located around the world. As of 2016, over 9.0 billion speed tests have been completed through speedtest.net on over 1500 mobile service operators around the world.