Shatara: Fifth Generation (5G) is an Economic Opportunity for the Country 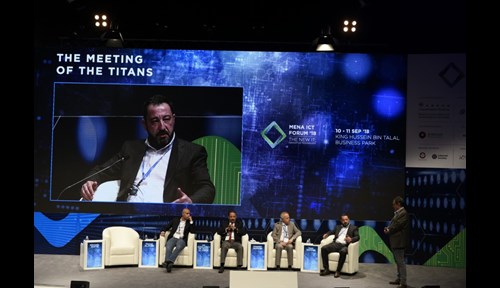 Speaking at the Closing Session of the MENA ICT Forum 2018 Shatara: Fifth Generation (5G) is an Economic Opportunity for the Country September 13, 2018 – Amman, Jordan: Umniah CEO Ziad Shatara, speaking at the MENA ICT Forum 2018, said that the fifth generation (5G) technology with its extensive positive advantages is a national economic opportunity and will be the basis for developing smart project applications and the eventual transformations into smart cities. During his participation in the closing session of the MENA ICT Forum 2018, Shatara explained that in order to be able to operate 5G technology, a fully integrated system that reinforces enhanced mobile broadband services should be in place, providing extremely efficient communications providing ultra-reliable and low-latency communication, in addition to the ability to support Massive Machine Type Communication (MMTC). . Shatara, a leader in the local telecommunications sector with extensive experience in the field, spoke of both the advantages and challenges of 5G technology, explaining that due to its high data processing speeds, it can reinforce telemetric, virtual and augmented reality technologies through networks and remote communications, as well as other advanced technologies, which in turn improves consumer experiences, and allows for more streaming of content that requires high range frequencies, such as high-definition videos (including niche formats such as 4K and HDR), and the downloading of large files and multi-player games. Umniah's CEO also noted that 5G technology provides enormous advantages for the Internet of Things (IoT) and high-quality communications while ensuring ultra-reliable low-latency communication (URLLC) such as drone control and self-driving vehicles, thus reducing the gap between wired technologies such as fiber and wireless technologies. Shatara went on to add that massive machine-type communications (MMTC) will be the basis for smart cities and the expansion of the IoT. He noted that over the next two years and until 5G technology and ecosystem are matured, operators can utilize the 4G, (LTE, NB-IOT), or/and other non-3GPP technologies such as LORA, Sigfox. Shatara also spoke of the challenges facing the implementation of 5G, which mostly revolve around its high cost for operators. 5G will also require the review of communications sector legislations and the cost imposed on frequencies in order to create demand. Furthermore, the development of 5G technology will be a considerable transformation for operators, especially in terms of ensuring coverage to governorates and remote areas. The technology will also require large infrastructure capacities in order to respond to sizeable amounts of data. He explained that operating 5G technology would require substantial investments in infrastructure, systems, and devices, remarking that telecommunications companies and operators have not yet recovered their investments in 4G. During his participation in a panel on FinTech, Marketing Director at Umniah Zaid Ibrahim said that the technology is set to positively contribute to reinforcing financial inclusion as well as the provision of various financial solutions, particularly for unbanked citizens in underserved or remote locations. He noted that the demand for FinTech is expected to increase over the next few years in Jordan, especially as the costs of the service will decrease and they will become more accessible around the clock to larger swaths of society. Also at MENA ICT Forum 2018 Commercial Enterprise and Home Broadband Director of Umniah, Mahmoud Abu Zannad participated in a session entitled "Keeping our Cyber Space Safe, Secure and Reliable." During the discussions, he stressed that protection to information security threats has become a fundamental part of telecommunications, noting that the use of cloud services and the IoT are integral in protecting data effectively and efficiently. The theme of this year’s forum was “The New IT; Innovative Technology,” and was held under the royal patronage of His Majesty King Abdullah II on September 10 and 11. Umniah, a strategic partner of the MENA ICT Forum 2018, believes that the conference is an important information platform that highlights the most recent developments in the fourth industrial revolution technologies, including artificial intelligence, the IoT, and cloud computing, as well as their roles in achieving growth, developing societies and attaining prosperity. - End-