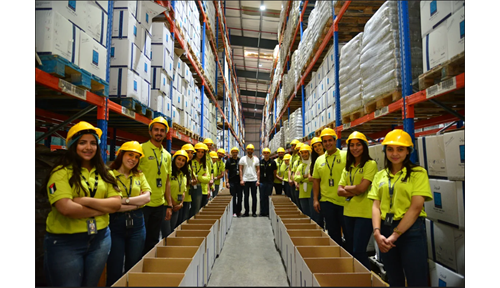 On the Occasion of the International Day of Charity Umniah Launches Community Volunteer Program Under the Umbrella of its Umniah Al-Khair Initiative September 9, 2019 - Amman, Jordan: On the occasion of the International Day of Charity, which falls annually on September 5, Umniah and its strategic partners launched a volunteer social program headed by its youth team with the participation of company employees as well as members of the local community. The initiative, which is part of Umniah Al-Khair program, is dedicated to instilling a culture of volunteerism among the company’s employees, showing them how effective their contributions are within the Jordanian society. A pillar of the Umniah Al-Khair program in the field of social work in Jordan, the initiative reinforces the values of communication, charity, and solidarity among members of a community, inspiring youth and preparing them to become productive and effective members of society, in addition to giving them tools to succeed in their future careers. Speaking at the launch of the program, Umniah CEO Ziad Shatara said, "We are proud to launch Umniah's voluntary program on the International Day of Charity, and we hope to create tangible changes as well as support the development process in the Kingdom. By reinforcing a culture of volunteerism, we have faith that these values will be instilled in our youth, who can use their vitality to make a difference in their communities in order to achieve social solidarity and integration." Shatara went on to add that the program will work to develop the skills of volunteers, building and developing their capacities as well as providing the opportunity to serve their community. He explained that the culture of volunteerism is experiencing exponential growth in the Kingdom, a clear reflection of the spirit of giving, solidarity, and mutual support that Jordanian society enjoys. The program began as a pilot program during the month of Ramadan in cooperation with the Jordan Hashemite Charity Organization (JHCO) in support of the Arzaq program to prepare meals for fasting individuals at Arzaq kitchen. It continued through Eid Al-Adha, and saw Umniah’s youth team volunteering to prepare clothes for the occasion. As part of the program, 20 Umniah youth team volunteers worked alongside others to prepare food packages that were distributed by Tkiyet Um Ali. Volunteers completed approximately 600 packages, each containing 24 food types, sufficient for a family of between three to five members. Umniah regularly implements initiatives under its Umniah Al-Khair program in cooperation with non-profit organizations including Tkiyet Um Ali, JHCO, the Crown Prince's Foundation’s Naua platform as well as various local community institutions. It is worth mentioning that in 2012, the United Nations General Assembly declared September 5th, as the International Day of Charity, with the aim of raising awareness about the value of voluntary work as well as to provide a joint platform for charity activities around the world for individuals and charity, humanitarian, and voluntary organizations to participate in order to achieve their objectives at the local, regional and international levels. - End -