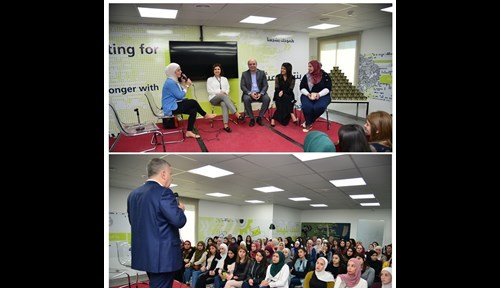 On International Women’s Day Umniah Celebrates Outstanding Female Employees and Honors Influencers Jordanian Women March xx, 2019 – Amman, Jordan: On the occasion of the International Women’s Day and in appreciation of the efforts of its female employees and their role in advancing the company, Umniah held a celebration at its headquarters to honor its outstanding women team members. Umniah’s Human Resources and Corporate Affairs Department also hosted a workshop, attended by all female staff and administrative board members, during which distinguished female team members spoke of their success journeys, as well as their greatest life and career achievements. Director of Human Resources and Corporate Affairs, Sami Jarrar spoke of the company’s pride at the efforts of its female staff members from all departments, as well as their measurable impact on the company. He noted that their success at Umniah is a reflection of the excellence displayed by all Jordanian women, who are considered role models for their counterparts in the Arab world. Jarrar went on to add, "Although international statistics show a low level of economic participation by women in the workforce, and for Jordanian women whose number is one of the lowest in the world, the competence and determination that characterizes Jordanian women is reflected positively in the work environment.” He noted that Umniah will continue to pave the way in the field of gender equality, as well as endeavor to improve the work environment so that it is more women-friendly. According to Jarrar, International Women’s Day is an opportunity for Umniah to honor its female employees and express gratitude to them for their dedication and loyalty, which reflects positively on the company's strategic vision for further success in Jordanian market, and wished them continued distinction and accomplishment in their careers. At the event, Umniah presented its women employees with gifts in recognition of their efforts. In addition, the company honored influencer Jordanian Women for their contribution to the society. - The End -