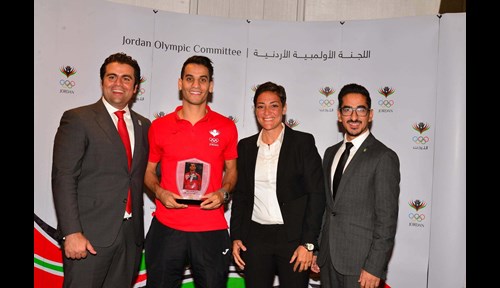 Olympic Committee Honors Achievers at the 2018 Asian Games September xx, 2018 – Amman, Jordan: President of the Jordan Olympic Committee (JOC) HRH Prince Faisal bin Hussein honored athletes who won medals for Jordan at the 18th Asian Games held between August 18 and September 2 in Jakarta, Indonesia. The ceremony held by the Jordan Olympic Committee, which took place on Wednesday, was also attended by HRH Princess Aya bint Faisal, Princess Zeina Al-Rashid, Prince Hussein Mirza, the Indonesian ambassador Andy Rahmianto, Dr. Sari Hamdan, Khalid Attiyat, Amman's Deputy Mayor Engineer Hazim N'aymat, members of the JOC's Board of Directors, prominent figures as well as officials from Umniah. This ceremony was held in cooperation with Umniah, which is a sponsor of the JOC, which is a keen supporter of Jordanian athletes, continuously working to encourage them. At the event, Umniah CEO Ziad Shatara spoke of his respect for the Jordanian athletes, who garnered 12 medals, including two golds, one silver and nine bronzes. He added that these results are the best in the history of Jordan's participation in the Asian Games, which began in 1986. Shatara went on to confirm Umniah's continued support of Jordan’s achievements in the realm of sports, both regionally and internationally, adding that the country’s young athletes can count on further endorsements by the telecom company. Shatara also spoke of the efforts of the JOC, headed by Prince Faisal, in promoting all athletes who represent Jordan, proudly raising the country’s banner high. Also at the ceremony, JOC Secretary General Nasser Majali spoke of his pleasure with the achievements made during the 18th Asian Games, which further upholds the positive developments taken by Jordanian sports at different levels over the past few years. Majali spoke of the support provided by Umniah, adding that the company has emerged as a strong and avid sponsor of Jordanian sports. Since its launch, Umniah has been at the forefront of support for the sector, sponsoring initiatives and partnerships that aim to bolster sports throughout the Kingdom. At the event, Umniah presented the medalists with offered gifts to the winners, who included Juliana Al Sadeq (gold in Taekwondo), Haydar Al-Rashid (gold in Jujitsu), Zaid Jaranduqa (silver in Jujitsu), Ahmad Abu Ghosh (bronze in Taekwondo), Yara Kakish (bronze in Jujitsu), Abd Al-Karim Al-Rashd (bronze in Jujitsu), Freeh Harahshey (bronze in Jujitsu), Abdelrahman Masatfeh (bronze in Karate), Bashar Najjar (bronze in Karate), and Hussein Ishaish (bronze in Boxing). -End-