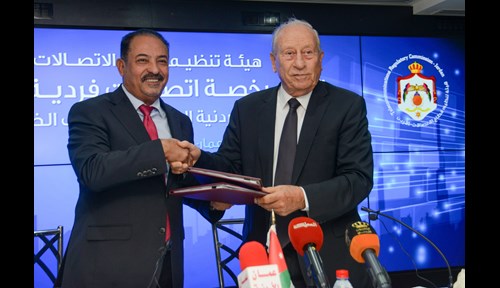 With a capital of JD40 million JEPCO, Umniah Officially Launch Jordan Advanced Fiber Company ‘FiberTech’ The launch was announced during a press conference held at the Telecommunications Regulatory Commission (TRC) in Amman and included the signing of the Individual License agreement Amman, Jordan, 8 October 2019: The newly-established Jordan Advanced Fiber Company (FiberTech) has announced, during a press conference held at the Telecommunications Regulatory Commission (TRC) in Amman, the official launch of its operations in Jordan with a capital of JD40 million, after completing all necessary permits and certifications. The company, a first of its kind in Jordan and the region, will create a new infrastructure for a large-scale over-ground fiber optic network in the areas where the Jordanian Electric Power Company (JEPCO) operates, as well as link smart electrical meters and other components of the electrical network owned and operated by JEPCO. FiberTech will provide mass high-speed internet services to telecommunications companies and internet service providers operating in Jordan, eventually reaching over 1.3 million homes and businesses in Amman. The announcement was made by the TRC’s Chief Commissioner and CEO Dr. Ghazi Jbour, and Chairman of the new Jordan Advanced Fiber Company (FiberTech) Othman Bdeir. In his speech, Dr. Ghazi Jbour pointed out the importance of the TRC decision to grant the new company an individual license, which is supported by the quality of services the company is expected to offer and the extent of its geographical coverage. By contributing to the deployment of high-speed internet services using fiber-optic cables in all areas serviced by JEPCO, FiberTech will be able to support the general objectives of the telecommunications and information technology sectors in Jordan that aim to create the right infrastructure to support the services of the fifth generation (5G) technology. This is in line with the TRC framework that aims to provide the necessary resources to launch 5G services in Jordan, which will eventually lead to the advancement of the digital economy and electronic services in Jordan and contribute to raising the overall quality of governmental services in the country. Dr. Jbour praised the efforts made by both parties in achieving a true partnership between two privately-owned companies and the services they provide in order to supply the new infrastructure with state-of-the-art mobile telecommunications and internet services and electric power, which will ultimately contribute to increasing the added value of economic and investment activities in Jordan, as well as offer advanced services to beneficiaries from all segments of the society. Commenting on the issuance of the license, JEPCO Chairman Isam Bdeir said: “We at JEPCO are extremely happy with the TRC decision to grant a license to the Jordan Advanced Fiber Company (FiberTech) that has long sought to launch its operations in partnership with Umniah.” “We look forward, with hope and optimism, to continue JEPCO’s mission, since its establishment in 1938, to serve the country and its citizens with improved services, added value and benefits for the company’s beneficiaries, shareholders and the national economy,” he noted. “With the launch of this company, we will build a fiber-optic network that will cover all areas serviced by JEPCO, in order to provide advanced telecommunications services, as well as use the network to link smart electricity meters and other components of the electricity network in a way that allows the company to provide better services when it comes to troubleshooting and ensuring electrical continuity, as well as handling electric power losses, billing, and combating the phenomenon of electricity theft,” Bdeir added. Bdeir concluded by thanking the Telecommunications Regulatory Commission (TRC), the Energy and Minerals Regulatory Commission (EMRC), the teams at JEPCO and Umniah, and all those who contributed to the company launch. The Chairman of the Jordan Advanced Fiber Company (FiberTech) Othman Bdeir commented saying: “With a capital of JD40 million, the new company is a 100% Jordanian private shareholding company, and is considered a qualitative addition to the Jordanian market and to the lives of individual and corporate subscribers, who will get access to reliable, high-speed internet services, making it more convenient for them to exchange data and content.” Bdeir noted that the new company will start field work in order to deploy the new fiber-optic network and provide high-speed internet services in Amman starting from the areas of Tabarbour, Al Baraka and Al Khalidi, and will then offer these services to other areas according to a pre-planned schedule. Bdeir expressed his hope that the new Jordan Advanced Fiber Company (FiberTech) will be an active supporter of governmental plans aiming at accelerating digital transformation in Jordan in all kinds of life applications, pointing out that the new company will provide hundreds of direct and indirect job opportunities, and improve the country’s position in terms of digital readiness and electronic transactions worldwide. Bdeir stressed that the company will achieve significant financial and non-financial returns for its investors, partners and the national economy in general, by applying an advanced business model that integrates the energy and telecommunications sectors, revolutionizes the electricity billing process, and strengthens the capabilities of the Jordanian Electric Power Company (JEPCO) to maintain the continuity of electric power supply to its subscribers. Bdeir expressed the gratitude of the Jordan Advanced Fiber Company (FiberTech) for the efforts made by the Jordanian Electric Power Company (JEPCO) to implement this vital and important project and bring it into being. Bdeir also thanked the support of the Telecommunications Regulatory Commission (TRC), headed by its CEO Dr. Ghazi Jbour. The press conference included the signing of an Individual License agreement, which was signed by the TRC’s Chief Commissioner and CEO Dr. Ghazi Jbour, the Chairman of the Jordan Advanced Fiber Company (FiberTech) Othman Bdeir, and the CEO of Umniah Ziad Shatara. The Jordan Advanced Fiber Company (FiberTech) is a joint venture between the Jordanian Electric Power Company (JEPCO) (51% share) and Umniah (49% share), and was announced in February 2019 with a mission to establish a new infrastructure that can provide high-speed internet services to about 1.3 million homes, businesses and facilities in Jordan. -End-